When I moved to Ibiza I knew what I was signing up for. As my friend C often says, ‘This island runs on sex.’

Outside almost every restaurant in Ibiza Town you’ll find a heavily made up young women in heels and miniskirts whose sole role is to lure in custom. In San Antonio outside the little boat shacks that line the marina, young women in bikinis are employed to tempt you on to various vessels of dubious seaworthiness. Of course, that’s just the surface, scratch beneath and you’ll find the commodification of coitus on every corner. Sex sells and on Ibiza, it’s the primary industry.

A few weeks ago I applied for job as a waitress. ‘Please attach a photo with your CV’ the ad said. I didn’t recoil in militant feminist horror and retreat to my bunker in a burlap sack. I needed a job. Pretty urgently as it happens. So I sent off a CV with a photo attached. This is the reply I received a few minutes later:

Either she hadn’t even opened CV or she was unable to see the photo I had attached to my CV.

The wording infuriated me as she only seemed willing to offer me an interview on the proviso that she knew what I looked like.

I surmised that this particular employer couldn’t even be bothered to look at my CV unless she could be sure that I was attractive. I decided not to respond to the email. I reasoned that while there might be an element of sexism in every waitress job on the island perhaps there would be some that would at least favour my skills first, and my looks second.

At the moment I am in a financially precarious place and I don’t have the luxury of turning down work, so I wrestled for a while with the notion that I should in fact just send this employer some more photos and stop being so bloody precious about the whole thing. I have no moral objection to women cashing in on their looks if they want to. After all, we live in a capitalist, patriarchal society, and we all have to eat. However, we should also have the right to decline work that requires us to look a certain way without being questioned. I suppose one of the initial reasons I decided not to respond to her email with more photographs was because I wasn’t exactly sure if I would pass the looks test. I’m thirty-five and sporting a few wrinkles on my brow. I would prefer to work somewhere where my specific skills might come in useful. I assumed I would not hear any more from the recruiter after ignoring the email but the next day I got a frantic phone call,

‘I need to receive some photos from you,’ she demanded in Spanish.

I was caught off guard, so instead of saying,

I didn’t send them.

Then a day later another email:

To which I impetuously replied:

This is the brilliantly awful response I received: 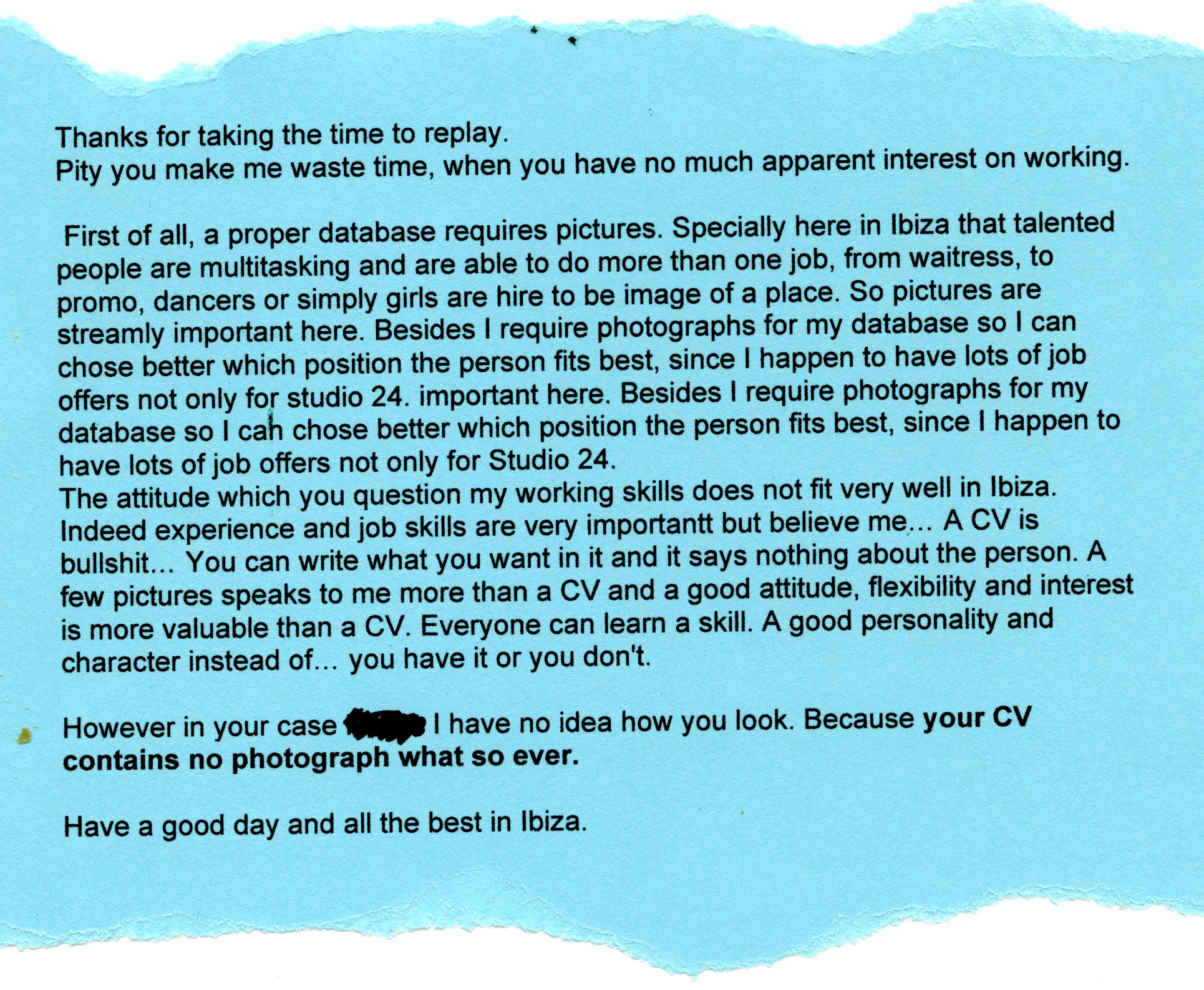 The irony is that initially my intention was specifically not to waste her time. I didn’t bother to send her photos because I know that an image conscious job is not suitable for me.  Like many women, I spent my twenties feeling insecure about my looks.  Finally, at thirty-five I am more comfortable with who I am and part of that comfort comes from not putting myself in situations where my appearance is constantly scrutinized.

I have fifteen years of waitressing and bar tending experience. I even managed a busy restaurant in London for three years and never took a single sick day off. Surely, that should count for something regardless of what I look like?

While I accept that image is important in the glamorous clubs of Ibiza, I believe that women should demand to be judged as a whole people, not simply on a photograph. Whether you’re a dancer, a model, a PR  or a waitress your personality is important. Who you are matters. A CV is most certainly not bullshit. It chronicles the life you’ve led. That’s what makes a woman, not a pout and a pair of tits (though obviously it’s fine to celebrate those things too).

Initially I wasn’t sure why I wanted to challenge this woman’s demands for a photograph but when I got her reply I understood.  I no longer want to be complicit in a society that allows looks to define us as women.

Now I know why I wanted to challenge her demands. I challenged her for the ugly fifteen year old me with the monobrow and the faint moustache who got straight As at school but was ignored and overlooked. She believed that most important thing a woman could be was beautiful.

I challenged her for the beautiful twenty-two year old me who got plenty of waitress jobs thanks to her big hair, big boobs and big smile but who still thought she was ugly and hated her body so much that she ruined a perfectly good holiday to Crete by spending the week weeping instead of swimming because of raging body dysmorphia.

I challenged her for all my wonderful female friends who confided in me numerous tales of insecurity despite all being goddamn, drop-dead, gorgeous.

Lastly, I challenged her for the thirty-five year-old me who is a bloody good waitress but who really wants to be a fucking good writer. I’ll never get back the time and energy I wasted on insecurity and eating disorders. Had I put all that effort into my literary career, right about now I might even have been on the Booker Prize longlist.

The land of (false) promise