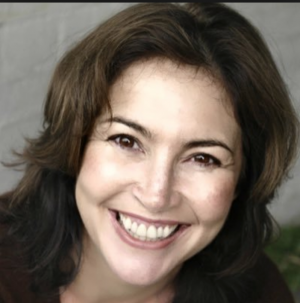 Amanda is the author of the bestselling satirical novels Selling Out and Secret Admirer (published by Pan) which have both received critical acclaim and have been translated into several languages. Her major YA thriller trilogy, Kumari, Goddess of Gotham, was nominated for the Guardian Children’s Book Prize and the Doncaster Book Award.

Amanda has a degree in drama and her first TV role was as a member of the Communist Resistance in ‘Allo ‘Allo. This involved running around with a dachshund tucked under one arm and deploying her best cod French accent. It has all been dramatically downhill since.

A broadcaster as well as an actress and novelist, Amanda appears regularly on BBC radio and LBC and was a contracted writer to the hit series Weekending on Radio 4. She has written for, or contributed to, The Evening Standard, The Times, New Woman, US Cosmopolitan, Bulgaria’s Vagabond and Company Magazine as well as numerous online publications.

Amanda has conducted a love coaching phone-in from the sofa of Richard & Judy and wooed the viewers on Channel 5 Live. She won an award at the Hungarian Gyor Film Festival for a short film she produced, a psychological thriller called Pros and Cons. She has just completed a crime thriller set in Bulgaria where she has a house she bought with cash strapped to her leg and is currently working on a new psychological crime thriller for adults as well as multiple non-fiction projects.

What Women Really Want in Bed

POSTCARDS FROM THE EDGE 12