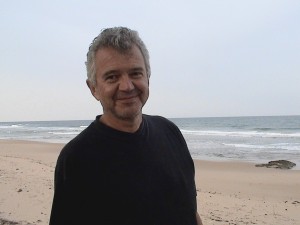 Andy Peake grew up in Crawley New Town in the post-war years. The abandoned grounds of the country hospital and endless building sites were an ideal adventure playground for a ten-year-old who wanted to create stories.

His career began as a copywriter in the States during the Vietnam War. He held a green card and narrowly avoided being drafted. Back in the UK, he chanced into a gofer’s job working for an American TV news company. After a number of years and a few promotions, he quit to freelance as a producer and jack-of-all-trades.

A grandmother born in Cuba fired an interest in Latin American politics and culture. He learnt Spanish at the University of Havana; studied for a Masters Degree in independent film and video (specialising in Cuban film since the revolution), and taught English in Mexico.

He now lives in South London in a Victorian cottage on a conservation area where restoration is sporadic and ongoing. He remains a jack-of-all-trades, trying to specialise in the impossible task of writing fiction.

Another postcard from beyond