Behold! The Erotic Review Penis Beaker in all of its glory! Specially commissioned by ER (with a design yet to be approved by Mumsnet). Crafted from molten glass into the clearest crystal by skilled Murano glassblowers steeped in a centuries-old tradition: each beaker hand-blown to become a thing of beauty, indeed, a joy forever. It will bring a timeless elegance and sophistication to your bedside table. Also an invaluable tool, calibrated in centimetres with finely etched numerals so that it serves as a measuring device at the same time as performing its essential cleansing operation. This commanding, masculine column of crystalline glassware is the perfect gift for the hygiene-conscious male. Moreover, its characteristic shape will prevent any chance of confusing it with the nocturnal bedside draft. Limited edition only, £97.50. 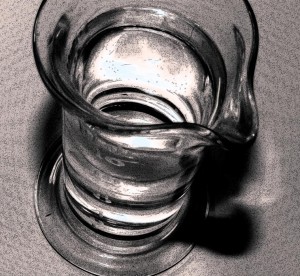 Oh yes, I know, it’s so easy to smirk. But as a male, I chortle guiltily at Penis Beaker Bloke (or maybe with: here’s hoping he has a highly developed sense of humour). But somehow it feels like breaking ranks and betraying the Brotherhood, whatever’s left of it. Well, betraying some kind of male solidarity, anyway. The Men’s [Liberation] Movement died a sad little death in the late 1970s, while Women’s Lib continued merrily upon its steep ascendant. Small wonder then, that twenty years later groups of sad, resentful men went deep into the American forest to make fires around which to bond and reclaim their lost virility.  As well as manly bonding or naked, manly wrestling, (see Bates and Reed in Women in Love) or giving each other dignified, manly hugs, they would weep proud, manly tears to mourn the absence of the Deep Male, the evermore elusive Wild Man – Iron John.

And now, just two decades further on, we are reduced to this… this sanitisation  of the membrum virile and its humiliation at the hands of, not just Mumsnet, but the whole media enchilada. In addition to the parody at the beginning of this piece, cue equally tasteless jokes about willy-warmers or PBB’s mates nervously covering their pints with beer mats. It’s enough to make a chap cross his legs in sympathy.

I suppose it’s our just deserts. That’s what men get for imposing those millennia of phallocentric patriarchy upon women. It’s what men get for not taking the Sisterhood more seriously at its inception. For their revisionist backsliding whenever they forget they’re New Men and fail to appoint a female member of the cabinet, empty a dishwasher or change a particularly odiferous nappy. It’s what men get for creating organised religion and pornography: the first one causes guilt, which brilliantly enhances the experience of consuming the second.

“We may find it embarrassing to talk about, but there’s never been a greater need to open up about sex,” says Mariella Frostrup on Channel 4’s Sex Box. Huh? Just who is left that finds sex an embarrassing topic? And “open up”? Anyone would think that sexperts have long suffered from some sort of gagging order. The reverse is true. For ages large publishing houses have been churning out sex guide titles with roughly the same frequency as cookery books. And while there are few real innovations in gastronomy, there are just about zero in sexpertise, so that the same old guff has to undergo frequent makeovers. Some are better than others, but ultimately it’s all about presenting and marketing the same product – just in a different way. And just why is this need to ‘open up’ about sex so pressing? Is Mariella hoping to provoke some sort of moral panic here, simply because a larger demographic has acquired the ability to access porn anywhere, anytime?

One positive outcome of pornography’s current widespread presence may be that, due to its very ubiquity and repetitiveness, it will eventually be ignored by all but a very few. Imagination being an important component of sex, this could prompt couples to become more creative in the bedroom. Another positive might be that porn’s not insignificant contribution to teaching people about genital anatomy will start to compensate for its more obviously harmful side. Sex educators have always been hampered by a cultural aversion to explicit illustration of sex.

We are being sold the idea of a perfect, but extremely bland and homogeneous sexual ideal with all the energy and ingenuity that the media can muster. Call me an old cynic, but I can’t watch Sex Box without drawing the conclusion that while the concept is mildly risqué, it’s just rehash of old material which is anodyne enough not to compromise advertising revenue or ratings and so be worth little in the way of enlightenment – or breaking new ground.

You’re either anonymous or you’re not