Uncategorised
January 25, 2016May 28, 2020 Editor 1407 Views 0 Comments
Achievement of the impossible? Turning Jeremy Corbyn into the hero of a comic opera.

If you enrol at Philippe Gaulier school for clowns, don’t expect to leave as a comic genius – the school believes true talent is only found once in a generation. But according to professional politics enthusiasts Bobby Friedman and Rupert Myers, Gaulier never checked the Houses of Parliament. Rife with buffoon-like behaviour, aspiring comedy writers can always cut-and-paste government goings on directly into their shows. But it was Jeremy Corbyn’s earnest and heart-felt plight that moved them to fill the London stage with a full-length musical.

On first glance Corbyn looks like a black-hole for humour. The twitter feed @corbynjokes was inspired by the Labour leader’s choice of song for his victory parade: Imagine by John Lennon. As the author of the feed asked, “how humourless would you have to be to choose Imagine for a victory parade?” it dawned on him that the answer was staring at him in the face. An entire school of anti-jokes was spawned.

Doctor, doctor I’ve got a lettuce stuck up my arse. I’m afraid it saddens me how many resources are wasted as capitalism dupes consumers.

We’re looking forward to lots of socialist-based puns but is there really enough hammer and sickle-sharp wit to have us rolling in the aisles? And we have to ask: will there be any sex?!? A Trident submarine with no missiles? We caught up with Rupert Myers before booking our tickets to make sure he could deliver the necessary payload…

ER: What’s the premise for the musical?

Myers: Jeremy Corbyn is forced to confront his past in order to understand a nuclear crisis. I don’t want to give any more away than that. Suffice to say it’s not all about 1970s pre-unification Germany.

ER: Is this the first time you’ve written a musical?

Myers: This is the first time either myself or Bobby have written a full-length musical. I have written and co-produced much smaller efforts that have involved music but we’re just writing the lyrics. We have a very talented West-End composer, Jen Green who is turning our jokes into beautiful music.

ER: When did you start work on this?

Myers: Bobby came to me on my birthday at the beginning of last October. His uncle thought it’d be great to do a musical on Corbyn. We hashed out the idea there and then in about 20 minutes. I thought that it was one of those things that you just joke about but Bobby was much more serious about it and pestered me. A few months later we had the finished thing.

Myers: He’s certainly very funny. I say we’ve finished it but we’re constantly having to re-write the thing because Corbyn is this permanent font for new scandal and intrigue. I think Ed Milliband in his time was tragi-comic as was Gordon Brown and then before that William Hague would have made a good musical. Galloway, John Prescot and Boris Johnson would have made for fine comedies too but this is Corbyn’s hour.

Myers: There is definitely going to be sex on stage in the play. Who that sex is between or what the sex is with you’re going to have to wait and see. But it’s fair to say it’s steeped in comic eroticism and it isn’t just about one relationship between two individuals. It’s far more complicated and 21st century than that. 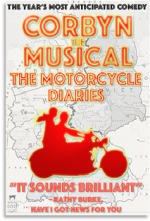 ER: We’ve heard that the play is focused on Corbyn’s sexual and political awakening… is there anything kinky going on there?

Myers: You’re right, this play is Jeremy Corbyn’s political and sexual awakening. I would say that most young people aren’t that interested in politics, they’re interested in sex. So our Jeremy Corbyn is unusual in that sense. He’s turned on by socialism and the ideals of the great communist writers well before he’s turned on by anybody or anything in our play. I think political awakening for most people comes much later.

ER: Why does sex and politics work together so well?

Myers: I think they come hand in hand – there’s a lot of comic scope in those twin burning desires. Comedian Simon Blackwell said to me that the thing that makes politics intriguing is that it’s human nature on a rolling boil: the stress and pressure of it. And I think love and relationships are the same. They’re both high stakes, high pressure environments. There is some similarity between politics and romance. And if I’ve noticed one thing about political engagement it’s that people get involved in politics because they haven’t got a girlfriend or boyfriend.

ER: Jeremy Corbyn: a pin up?

Myers: According to some, Ed Milliband was a great sex symbol. There’s something out there for everyone…

Myers: Well, our play features heavily on Diane Abbott’s attributes as a young woman but I’m not going to objectify female politicians as a way of selling tickets. It’s alright to make fun of politicians but women shouldn’t be put off from going into politics by people ranking them in terms of their sexiness.

ER: You’re a man after our own hearts, Mr Myers. We’ll go and book our tickets now… wonder if Jezzer’ll get front row seats?

Corbyn the Musical: The Motorcycle Diaries runs from the 12-24 April 2016 at the Waterloo East Theatre. Tickets available here