Uncategorised
September 24, 2013May 28, 2020 Editor 2044 Views 0 Comments
Are these the progenitors of today's A-listers? If so, why do they sound SO much more entertaining?

The fabulously rakish William Hickey was acquainted with many good-time girls, and catalogued his exploits in some of the more entertaining memoirs of the 18th century. He records that in 1781 he held a lavish dinner party for Lord Fielding and others at the Bull Tavern, on Shooter’s Hill. One of the guests was a prostitute called Miss Pris Vincent, who performed her party piece of pissing over a dining table into a champagne bottle held by Hickey on the other side. By manipulating her labia, she encouraged her urine to describe a graceful, golden arc through the air, and her aim was so accurate that at least a third of her water actually filled the bottle. Lord Fielding is said to have laughed so hard at this feat that he was near suffocation.

Standing as we do on this side of the prudish Victorian age, it is difficult for us to understand quite how revered and loved many of London’s sex workers were during the 1700s. A small percentage of working girls rose to dizzy heights, and courtesans were prized not simply for their sexual proficiency. While wives were required to be genteel and demure, charm, wit, and lively conversation were prerequisites of the successful kept woman, and men enjoyed their company in ways they could not with ‘respectable’ society women. Courtesans could also become celebrities, who were often genuinely cherished by both the men who kept them, and the public who encountered them at the playhouses and pleasure gardens. It was the first age of the publicity stunt, and courtesans were shameless PR queens. Kitty Fisher was offered a 1,000-guinea banknote for a night in her bed but, insulted by this impudence, she stuffed it between two slices of bread and ate it before her embarrassed admirer’s eyes.

The courtesan Emily Warren was the ‘amorous fair’ of William Hickey’s friend Captain Bob Pott, of the East India Company. Bob was so taken with Emily that he furnished her with a swanky London residence, a bright yellow carriage, liveried servants, and a box at the opera. In spite of the fact that keeping a celebrated courtesan was a fashionable pursuit, Bob’s feelings for Emily seem to have run genuinely deep, and to his father’s great displeasure, he later made her his wife. When Emily died suddenly on a ship in India after a brief illness, Bob was so grief-stricken that he towed her putrefying body behind the vessel to its final resting place by the River Hooghly. Here he spent a fortune building her a mausoleum and a commemorative column amongst the tigers of Culpee.

Emily was a protégé of Charlotte Hayes, one of London’s most famous high-class brothel-keepers. In 1773, Charlotte advertised a Feast of Tahiti, inspired by accounts of Captain Cook’s adventures amongst the willing women of Polynesia. Her entertainment included a live sex show, to musical accompaniment, by 24 young men and women brandishing one-foot-long dildos. The event was attended by 23 guests, including members of the nobility and several baronets, who all joined in with the performers when they could not contain their arousal any longer. I always think of this occasion as sex as a spectator sport with a pitch invasion at the end.

Elizabeth Armistead’s early life is veiled in mystery, but she may have begun her career in Charlotte’s bawdyhouse. Elizabeth was the mistress of the debauched Prince of Wales, before she became attached to the politician and libertine Charles James Fox. (Fox and the Prince often shared mistresses, including the actress and demirep Mary ‘Perdita’ Robinson, who was an enthusiastic campaigner for the Whigs.) Although he was the leader of the Whig party, Fox never let public duty prevent him from living life on his own terms. He was descended from one of King Charles II’s bastards, and once fought a duel with another MP. He was also a heroic drinker and a compulsive gambler. He was embroiled in a house-fire, and after escaping the blaze with his friends, stood around laying bets with them on which burning roof-beam would be the first to collapse. After a long career of sexual roistering, he became utterly devoted to Elizabeth Armistead, and married her in secret to protect her from the censure of polite society. It was one thing to take up with a courtesan; it was quite another to make her your wife. As Fox’s health failed, and his relish for public life evaporated, they would read to each other, and tend their St. Anne’s Hill garden together.

Love-matches such as these were by no means oddities. The wonderfully named Juliana Popjoy was the mistress of Beau Nash, the Master of Ceremonies at Bath. She looked after Nash in his declining years, and was so distraught when he eventually died that she lived for the rest of her days in a hollow tree in Wiltshire. You will have the Devil’s own job finding that kind of commitment and panache in the pages of OK! magazine.

Adrian Teal is the author and illustrator of The Gin Lane Gazette, published by Unbound, £12.99, available here. 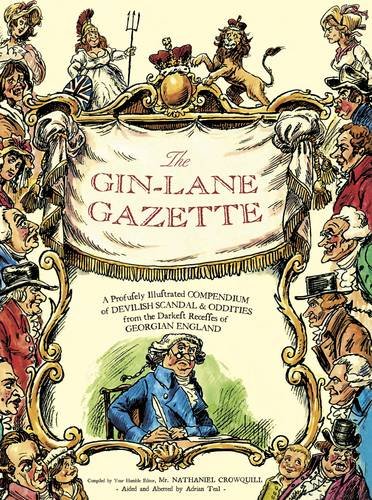 Postcards From Beyond No.5: Vintage Tractors v. Chelsea Tractors

A Body Hair-Raising Experience in Thailand