My friend Toby, who inducted me into serious cycling, had a relationship with his own bicycle which was almost sexual. We lived in a shared house at the time and he kept his bike in his bedroom, primarily for safety of course, but we teased him about whether he actually slept with it.

I had called at his room and seen him polishing the frame in brisk strokes or rummaging with his fingers through the complications of the tackle that dangled below, the derailleur, the rear mech.

And our speculations about the degree of his intimacy with his bike were not secret from him; he actively stimulated them with his bawdy humour.

The first time he introduced me to his bicycle he boasted of its sleek lines and precise angles.

‘Some people think you could put wheels on a garden gate, not at all. Geometry is what it is about.’

What really concerned him was the comfort of his own body.

I commented on the sharp saddle.

‘Well, a man has to have some pleasure, Ha!’ he snorted.

Bottom brackets and stems could be wittily punned in his jokes.

‘I had a lovely ride at the weekend’, he would declare with relish. ‘Mind you, my balls know all about it now.’

He wore chamois lined lycra shorts to protect them.

And when I started cycling he urged me to get the same gear.

‘You don’t wear underpants with them, nothing that will cause friction.’

He warned me also that a day in the saddle would take its toll on my cock.

‘You’ll feel it when you piss. Some men are made completely impotent by cycling. Mind you, when your tool is like a whipped snake, a shag is the last thing you want anyway.’

Which is as close as he came to suggesting that cycling was more important to him than sex, that he would rather ride a bicycle than another human being.

I hoped that being fit and mobile on my bicycle would persuade my girlfriend, Alanna, that I was a manly and impressive guy. I had been riding with Toby for months now and while he had pranced ahead of me with his arse in the air, making a style statement as much as refining his body tones, I didn’t care much what I looked like so long as I was building up my strength and could piss without pain at the end of the day.

If I had felt once that my crumpled genitalia, unwrapped in the evening for Alanna, were retreating from the prospect of play, having been buffeted enough for one day, then I would have cut down on riding the bike to save them for riding her.

But even better, Alanna herself bought a bike and we planned a holiday together, cycling down the west coast of Ireland, riding the roads by day and riding each other by night in my two person tent, at least once we’d eaten and refreshed ourselves with a few Guinness. 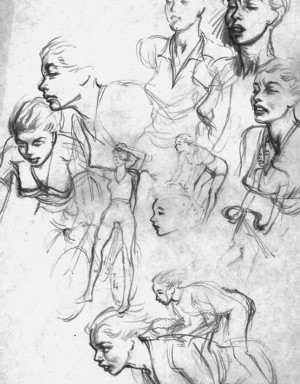 It was one of those rare and wonderful sunny Irish summers. I would ride behind Alanna, watching the spread of her wonderful haunches tighten and grow trimmer every mile, as those lithe white legs turned brown and strong, and I would envy her saddle.

Drivers coming towards us would risk their lives to study the promise of flesh under her low sweatshirt as she arched over her drop handlebars.

We didn’t always get on, Alanna and I, but cycling is a good way to be together and be safely apart as well during the tetchy days.

Some nights we would arrive at a beach with the sun low over a full tide and she would cheerfully throw off her clothes and run into the waves laughing. ‘Last one into the water puts the tent up.’

Other nights she would be sullen and tired. ‘Why can’t we have a decent fucking bed to sleep in, just once?’

And when we undressed together we would laugh at how pallid and crushed was the flesh that had been covered through the day while the exposed bits were tanned. We could probably have walked about like that in campsites and have people assume we were wearing white.

When we were close in a grapple it felt almost as if we found each other more naked than is normally possible, though I would look at the smudged folds and crushed hair of her vagina that was now like a wrung chamois, having been pressed on the saddle. I would coax it into opening with my nose and tongue, and it did take longer. And some nights when I came deep inside her the spasm of my own flesh was tentative against the inevitable ache in the innards of the stem. When I howled there was pain in the mix.

On good nights she shrieked as much herself, but then she always had.

After days sunbathing on the beach at Achill Island we were triple-toned, red with new sunburn on our shoulders and tummies, white still on our bottoms and brown as berries on our limbs and faces.

And an overlap formed on boundaries between shades, like the petals of a rose, for the divide was never precise.

‘I thought I would have a beautiful body after this’, she said. ‘I’m a mess. You and your fucking bicycle.’

‘Didn’t I tell you’, said Toby after I’d recounted these rides to him. ‘A bicycle never answers back.’

Malachi O’Doherty’s book On My Own Two Wheels is published by Blackstaff Press £8.99.

On Love and Marriage