Uncategorised
April 15, 2016May 28, 2020 Editor 2485 Views 0 Comments
The V&A is showing the largest ever collection of underwear to go on display, and has acquired over 60 new individual pieces for it’s permanent collection. Taking us on a lightning tour through the history of the role and function of the undergarment and indeed underwear as outerwear, we are treated to rare pieces such as a maternity breast feeding bra-let and the first pair of male “enhancing” briefs from Marks & Spencer.

Weirdly, there’s no mention of a period – an opportunity missed when the past year saw not only the launch of THINX period pants but a massive campaign to protect their trans-inclusive advertising from being censored (it features genius juxtaposing images of people in the knickers next to a blood orange or a falling egg yolk). The V&A’s exhibit is a combination of a classic British obsession with being “proper” and an attempt to skirt the boundaries of sexual fluidity and gender identity, but disappointingly failing to delve into either subject on more than just a surface level. Which may be appropriate, considering the museum tends to present historical items rather than to theorise on their cultural significance. But as a day out to lust over some exquisite fabrics, it excels. 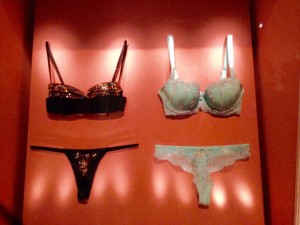 Laid out not so much chronologically but grouped in terms of functionality, the tantalisingly sexy is left until the end of the exhibit on the top floor. Much of the ground floor focusses on the evolution of the corset, from the first “stays” which would lift a woman’s breasts so high her chin could rest on them in 1795, to corsets and their swift decline into rib busting and indeed doctor-worrying tightness. X-rays from a woman wearing an eye-watering 48cm corset show how the boning squeezed the body so tightly that the organs were forced to move into unnatural places and the rib cage was compressed almost to breaking point. As a woman murmured next to me, “no wonder everyone thought they were hysterical. They just couldn’t breathe.” 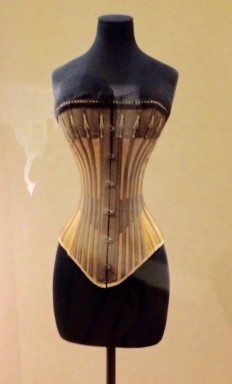 One area awkwardly straddles the sexual revolution of the 1960s onwards that led to the bikini, the thong and the speedo – but all we are treated to are a pair of Paul Smith boxers from the 1980s with a “60’s pop-art inspired” design, and a strapless lavender french lingerie set that one might now find mimicked in Primark. Two Swarovski embellished sets are the only whisper of a thong, and even then were designed to “be seen” under swathes of white silk or through the slit of a risqué evening gown. In this area, padded bras and sports leggings are given as much weight as revolutionary items such as the disposable paper briefs from Chuka in the 1960s and flannel trousers that were believed to create heat whilst rubbing next to the skin in cold weather conditions in the 1900s.

Stumbling up the elegant spiral staircase, by this point cripplingly aware of your less than glamorous daily knicker choices, one’s gaze is momentarily caught by one of very few pieces of art regarding the undergarment. A holographic abstract piece by Julien Opie reveals, as you walk past, a figure of a woman in various states of undress.

One case upstairs is full of rather eclectic pieces that reference underwear as outerwear. A Vivienne Westwood ensemble, notably blurring lines of gender with a padded crotch set of leggings on the bottom half and a corseted number with a renaissance painting sewn into it on the top, stands alongside a custom made “shibari-inspired” ensemble created specifically for the V&A which is, unfortunately, one of the tackier pieces that looks more like a kinked up Ann Summers number than any kind of couture lingerie. 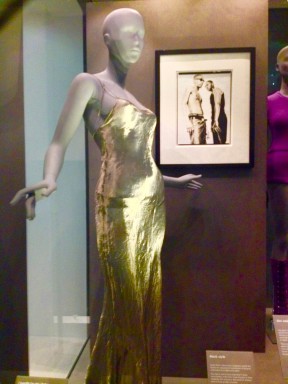 Next is a case full of nightwear intended for hosting. This includes a juicy couture tracksuit and, more tantalisingly, a set of “dinner pyjamas” from the 1930s with removable crotch – clearly intended for one of your more erotic dinner parties. On this floor, as with the rest of the exhibit, sex is a whisper rather than an obvious nod. As the head of Agent Provocateur explains in a promotional video playing behind me, her underwear is intended to be seen in movement – to highlight the beauty of a woman’s body in motion. Said motion, I believe, would be more often than not, inside the figurative bedroom. This is a strange moment with the latex pieces from House of Harlot too – an underwear designer that tailors for guests of fetish club Torture Garden. It slightly misses the appeal of latex, as does the saturating effect of having several sets of exquisite underwear on motionless mannequins in a glass case. Sex is implied, intoned and often quite clearly implicit in the garments presented, but their innate function – to empower, or to allure – is stifled. That’s not to say that the V&A should have sexed it up – but it does feel rather less sexy than I hoped.

ALL THE BETTER TO SEND YOU NUDIE PICS WITH MY DEAR