A new novel from Primula Bond has us quivering with excitement:
Pierre Levi, the gorgeous but disreputable brother from the bestselling Silver Chain trilogy is the star of this stand-alone novel.
Pierre fears that the hit and run which nearly killed him was the only thing capable of stopping his destructive behaviour. Now he’s torn between his desire for reconciliation with his brother, Gustav, and his attraction to Serena, Gustav’s girlfriend.

However, when comely nurse, Rosa Cavalieri, at the exclusive Aura Clinic, meets the traumatised Pierre in room 202 she is determined to get him back on his feet.
While Rosa is mending her own broken heart and although Pierre is plagued by demons and generally distrustful of himself and everyone around him. He becomes curious about his feisty and gorgeous nurse. Her gentle nature and playful teasing ignites a passion he didn’t imagine possible.
But the recovery that Rosa has worked so hard to achieve for Pierre is also beginning to pull them apart. And if Pierre cannot see that Rosa’s talents make her the perfect match for him, he’ll lose her for good.

He has amazing eyelashes. Long, thick, and black. They fan out over his hollow cheeks when he’s asleep, which is most of the time. They’re like spider’s legs. And I mean that in a good way. I like spiders.

We’re forbidden to go into his room, which is precisely why I can’t resist. I mean, what’s a no entry sign and two muscle-bound bouncers barring a closed door if not a blatant invitation? That’s pure temptation. That’s an order just begging to be disobeyed. At least, it is to me.

The drugged stillness in there at first was absolute. And the whiteness. The white sheets. The pallor of his bruised, sleeping face. His arms are white, streaked with dried blood. The muscles are slack. In the first week or so his left leg was up in traction to treat the fractured femur, his bed crowded with pulleys and weights.

I wonder, when the poor guy occasionally wakes to a room with no colour in it except the redness of his own blood, if he thinks he’s dead?

I doubt he’s been aware of my little visits. He’s heavily sedated. He wouldn’t be able to flick away a fly if it landed on him. But poco a poco he’s swimming to the surface. Little by little, reluctantly or otherwise, that instinct for survival is kicking in.

After they removed the traction I sneaked in the back way as usual, through the open door from the garden to avoid his minders, and went to stand at the end of his bed. And his eyes opened. Those spidery eyelashes bristled, became a thorny protective hedge.

At first they seemed blank and unseeing, yet something was stirring beneath the surface.

They dropped shut again, but I know what I saw.

I’m not like Dr Venska, stalking the corridors in her tight pencil skirts and teetering stilettos, clutching her clipboard against her high, pointed breasts. She’s some sort of therapist. The others joke that it must be sex therapy, the amount of time she spends in his room. But the word on the ward is that Pierre Levi’s about as articulate as the Sphinx, and Dr Venska’s about as sexy as a stick of rock.

The notes she tosses into the filing tray after each unproductive session consist of just one word: unresponsive.

He may be unresponsive by day, but at night it’s a different story. I’ve heard his terrors, when you can hear his screams all the way down the corridor. They find him shouting or crying, wide-eyed, sweat drenching the bed as he recoils from something or someone who isn’t there.

So no, I’m no shrink. I’m not qualified to go around probing and analysing. But I do have a theory. I know that behind those beautiful black stubborn eyes lurks more than just pain and anger.

After all, someone tried to kill him.

Pierre looks so happy, so fired up, so content to be tucked away in here. He claims I didn’t hurt him, that making love didn’t give him pain, but a tremor of anxiety runs through me. Suddenly he looks frail.

‘I just need to freshen up,’ I mutter, backing into the bathroom.

I stare at my reflection in the little tarnished mirror. My eyes are wild and sparking, darker and deeper than usual, glazed with all that kissing. I look sexy and dishevelled, lipstick licked off long ago, my kimono slipping carelessly down.

I return to the cabin, look at him lounging there, ensconced in my bed, so easy, so comfortable, leaning up against the wooden headboard. Such a big presence in my little wood-panelled cabin.

‘I don’t want a carer. I want a lover!’ He’s frowning, reaching for me. ‘Christ, I must have lost my touch! Didn’t the way I fucked you just now show you that? You don’t have to worry about hurting me, Rosie. You can be as wild and as abandoned as you like.’

His eyes are glittering dark slits arrowing into mine.

Something has bothered him. I daren’t ask what. I don’t want to talk any more.

Nor does he. He pulls me closer, so that my stomach is on a level with his mouth. He groans into the soft flesh, his hand fanning my buttocks to push me against his face. Such a primaeval, sexy sound. My man, groaning because he wants me.

Standing before him I feel even more naked than before. I wriggle, press my thighs together. He slides his hand in sideways and parts them.

Out in the cabin the CD goes onto repeat, Stan Getz sending his saxophone wailing suggestively up the scale, a minor key, sad but sexy.

The way Pierre’s looking at me. Examining this part of me like a precious jewel, a long-sought specimen. It’s because he’s so slow, so quiet, his lips working silently as if he’s praying. It’s as if this core of me is rare, precious, the Holy Grail, something he’s somehow been denied.

I lay my hands gently on Pierre’s head, on his face, run my fingers through his thick black hair. He parts me gently with one hand. His lips are so close to my core. I wriggle shyly. His fingers hold me open like a prize, wide open, unfurl me like a flower. One finger smoothes out each petal, making each part damp, then wet, as he touches it, and then his mouth is moving against me and he slides his tongue up me, like a cat, in one movement.

I cry out before I can stop myself. I moan and shake uncontrollably, tugging at his hair. It’s not just the one small sliver he’s touched and inflamed. The wet slick of his tongue has licked right through me, embers catching fire. To the roots of my hair, the tips of my fingers as the sensation shoots through me.

I gasp, a really dirty, wanton sound, grasp his shoulders, tangle his hair in my fingers. He pauses. I loosen my grip but I’m not letting go completely. His fingers hold me open, the exposure exquisite yet excruciating.

His warm, strong tongue licks me again. My legs are buckling as he licks, and then his tongue flicks on the bud that’s poking out rudely, waiting.

It’s private, but it’s no mystery. Certainly not to him. Shades of other women, Venska, Polly, scores of others, other kisses on other body parts, should turn me off, make me cold, but those thoughts only make my desire all the fiercer. I want to be the best he’s ever had.

As Pierre touches my burning clit with the tip of his tongue it’s like an electric probe. I close my eyes to all those shadowy rivals, consign them to the past. I’m starting to come now, those first strong ripples of rising excitement breaking like surf on the beach.

I’m grinding against his mouth, his fingers, his tongue, ripping at his black hair, squeezing my thighs round his face, crying out as I fall onto the bed, shaking as if I’m cold, crashing onto him, too late scared I’ll hurt him as he slides backwards to catch me.

I land on top of him and lie there, never wanting to move, listening to the slow, steady thump of his heart beneath me.

Outside the porthole the water is black as pitch, the surface ruffled by the autumn breeze.

Pierre, the sequel to the Silver Chain Trilogy, is on sale today; you can buy it here. 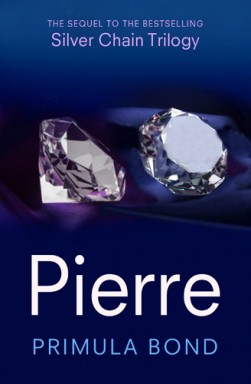 The Survivalist: An Interview with Stephen Fingleton