Uncategorised
June 13, 2018May 10, 2021 Editor 56832 Views 0 Comments
In the wake of the historic Irish Referendum, Laura Ward looks back through past societies at the almost unbelievable obstacles facing women in the UK who sought terminations and the bizarre underground culture that rose around them.

Abortion was the only medical procedure to be banned by law

Far more brutal surgeries, such as lobotomy or clitorectomy, were performed at whim. After the country’s separation from the UK (concluded in 1921), Ireland’s eighth amendment had made abortion illegal since 1983, even in the cases of rape, incest and severe danger to the mother. Abortion law still remains unchanged in Northern Ireland.

Abortion was remained a widespread method of fertility control, even in areas where it was banned.

The Catholic Church was not against all forms of abortion until 1869.

Previously, an abortion which that took place before ‘ensoulment’ or ‘quickening’ was regarded with leniency by both Church and State. Pope Pius IX (pictured) removed the distinction when he declared an ‘automatic excommunication’ for anyone ‘procuring a successful abortion’. Coming three months before Pope Francis’ first visit to Ireland, this Referendum is an overwhelming defeat of Catholic doctrine and has been described as the country ‘throwing off the shackles’ of the Church.

They were also incredibly dangerous and are still used in countries where abortion remains illegal. Gangrene, hallucinations, convulsions, organ failure, haemorrhage, and death were are just a few of the potential side effects. (Yes, that’s parsley in the picture. Its essential oil – apiol – was widely used to cause abortion).

Most abortions were had by married women desperate to ease the physical, emotional and economic toll of excessive childbearing.

Comparatively few were had by single women faced with the shame of an illegitimate pregnancy. The fact that over a third of women died in childbirth for much of human history was no doubt a factor for many who chose this option. 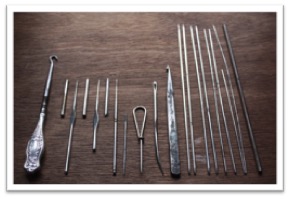 Misinformation on reproduction and contraception actually increased a woman’s chance of unwanted pregnancy.

while a popular contraceptive leaflet (pictured) advised that withdrawal withdrawing the penis before ejaculation was ‘absolutely certain as a preventative’.

Women were quick to discover and share new abortion techniques.

In 1890s Sheffield, for example, an outbreak of water-based lead-poisoning resulted in numerous miscarriages. Consequently, women began ingesting diachylon – a widely available lead-based plaster – in the hope that it would similarly end their pregnancies. By 1914, the use of diachylon as an abortion technique was had been reported in Newcastle, Lancashire, Hull, Doncaster, Nottingham, Leicester, Birmingham, Bristol, and London. Many Irish women had to travel abroad to seek an abortion over the past 35 years, and it became known as ‘an English solution to an Irish problem’. The obstinacy of the Eighth Amendment in Irish law caused a number of high-profile tragedies, include the ‘X Case’ in 1992, in which an unnamed 14-year-old girl was denied travel to the UK for an abortion, and the death of Savita Halappanavar in 2012, who died after complications during miscarriage after doctors refused her premature termination.

With the huge demand for abortion, reputable companies (like Beechams) began to manufacture and advertise quack remedies to ‘restore regularity’.

Cleverly worded to avoid persecution, these pills ‘for females’ were guaranteed to remove any ‘obstruction or irregularity’. They were largely useless.

‘Abortion’ ads paved way for one of the largest blackmail schemes in history.

In 1898, the ironically named Chrimes brothers placed an ad in several newspapers for ‘Female Tabules’, which promised to remove ‘the most obstinate obstructions and irregularities’. With over 10,000 responses, the brothers set about blackmailing these women with public exposure and ‘immediate arrest’ if they did not send £2 2s  along with ‘a solemn promise’ to never again ‘prevent, or attempt to prevent yourself giving birth to a child’. Within three days, they’d amassed £819 (around £100,000 in today’s money). The scheme was rumbled after one woman showed the letter to her husband who took it straight to the police. 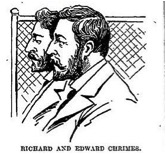 The most shocking element of the Chrimes’ sensational trial was the unavoidable conclusion that thousands of ‘respectable’ women were seeking to abort their pregnancies.

Abortionists were rarely regarded as criminals within their local communities.

Alfred Thomas Heap, for example, was the last abortionist to be hanged in 1875, after accidentally causing the death of a woman he aborted operated on with a spindle.

His solicitor, the jurors, and the wider community leapt to his defence with a petition for clemency, stating that he had a ‘bona fide desire of doing the unfortunate deceased woman a kindness’. Court papers from other abortion trials reveal similar attitudes.

Despite loudly denouncing abortion as ‘infantile murder’, it was common knowledge within the profession that medical men routinely performed abortions. These ‘wicked men’, remarked the surgeon Thomas Radford, could cover ‘their crimes under the pretension of a legitimate act’.

When a pregnancy had to be terminated to save the mother’s life, many doctors favoured craniotomy (the surgical perforation of the skull of a dead fetus to ease delivery ) and embryotomy over abortion.

Both of which involved the destruction of a full-term infant. With a maternal death rate of 84% in 1900, caesarean section was not a realistic alternative. 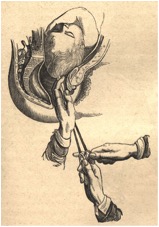 Most modern techniques of abortion were developed during the Nineteenth Century.

Dilation and curettage (scraping of the womb), dilation plus catheter (disruption of the amniotic sack), syringing, and even vacuum aspiration have all been accredited to this time. Safer abortion drugs, however, would not appear until the next century.

Why do we kiss?

There Must Be Easier Ways To Earn A Living