Is ‘Marcel Lucont’ ever pronounced “Marcel Le Con”? And, if so, would you say that the foot fits the shoe, so to speak?
No, and no.

How did you get into comedy?
It could be said that comedy got into me. As a new-born infant my routines were legendary in the arena of my playroom – from derisory impressions of adults that would come to visit, to hilarious physical routines using my father’s cigarettes. I have entertained ever since – a skill which, it would seem, is innate to me. This ability to amuse was a manipulative skill I discovered early on, around the same time I discovered that shrill, insistent screaming resulted in breasts being presented to me immediately. This latter skill is sadly less successful in later life. 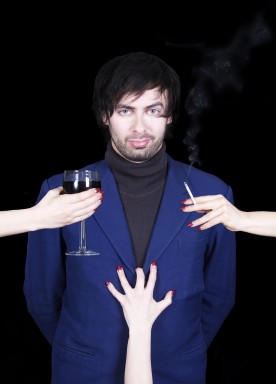 Do you have any comedic influences, or are you entirely unmarred by external forces, a phoenix born from your own ashes?
Voltaire was and is, of course, an influence for me, Rabelais is partially to blame for my bawdier side. But often I am inspired simply by what I observe in my surroundings – a glaring social faux-pas, a hopeless lover’s public rejection, a fully-grown man losing a battle with a swan…

We notice you have a number of books to your name (we particularly liked the look of Il fait BOO: une histoire pour les enfants). Do you consider your main calling to be comedy, or the education and enlightenment of the British masses?
Ah, yes. Il Fait BOO – my debut child’s fiction novella concerning a spectre that devoured fat children’s souls – was sadly withdrawn from bookshelves due to complaints (most likely from petty adults). I still maintain it contains a pertinent message. My professional calling is wherever my pen, mouth or legs carry me, whether they are welcomed or otherwise.

Your sex poetry is famed for its ability to warm the cockles of even the most chilly-knickered prude. May we hear some?
You certainly may. My book What We French Think Of You British… And Where You Are Going Wrong contains some exquisite Marcel sex poetry, as does my forthcoming album Vive Lucont. I would advise reading the former while awaiting the release of the latter.

In the Best Possible Taste

WHAT’S IN A NAME?