The creative/personal partnership of Patrick Whitaker and Keir Malem – also known as Paddy & Keir. Their first solo exhibition Pop Artisans  opens on 18th November 2017 at The Gallery Liverpool, 41 Stanhope Street, Liverpool, L8 5RE and runs until the 10th December 2017 – with free admission to all. This is part of the HOMOTOPIA Festival, now in its 14th year, which is celebrating with 50 events in Liverpool for the 50th anniversary of decriminalisation.

You may well have seen their recent work in this year’s blockbuster, Wonder Woman in the form of the 160 costumes they created for the Amazon warriors of Themyscira.

The duo’s work isn’t exclusive to the world of film. They started life as a fashion label in London in the 1980’s.

We were lucky to catch up with them for an interview before their show:

ER: How did you both meet?

WM: we meet in 1986 and a gay pride house party. The following year Keir helped me with my degree collection for my final show on the fashion course at St Martins.  That’s when we started working together.

ER: You started life as a fashion label in the 1980’s and your first clients where the boy band Bros. How did that come about?  -What did you make for them?

WM: Paddy was working in the Way In fashion department of Harrods: they also stocked their early clothing as a label. Bros came in one day and purchased one of our jackets and Paddy was introduced to them as the designer/maker which led to us making stage gear for them.

ER: You used to show your collections at London Fashion Week in the 80’s. Are there any highlights from this time?

WM: We were lucky to have a great deal of press interest in our pieces at that time including pages by Herbs Ritts in UK Vogue and we were frequently featured in The Face magazine and profiled on The Clothes Show, which was a big deal at the time.

ER: There is definitely a Whitaker Malem handwriting to your work. How would you describe it?

WM: What we are known for and is getting things very close to the body and there has always been a sculptural quality to our work. Stylistically we are interested in Futurism with an Arts & Crafts approach. 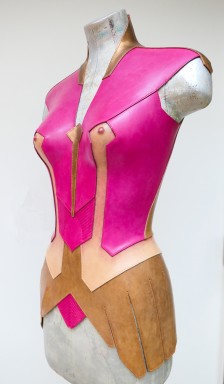 ER: How would you say the London fashion scene has changed since you first showed as a label?

WM: In the early days U.K /London fashion was dominated by streetwear and our designs spearheaded a move towards a more crafted, sculptural type of fashion- More akin to the work of Alia, Mugler et al who were operating in Paris at the time. Now London designers are well known for making more esoteric conceptual pieces.

ER: As a duo you have collaborated with some of the most respected people in the industry such as the late Alexander McQueen for Givenchy and Hussein Chalayan and Giles Deacon, to name a few. How did these projects come about?

WM: We were approached by all of those designer’s to work on all their collections. McQueen talked about things that he liked that we had made and designed the pieces in-front of us during our first meeting.

ER: Moving onto your film work, how and when did you make the crossover from fashion into film?

WM: We had always been influenced by films and done lots of pieces for rock & pop stars. We also noticed films that people had bought our clothes from stores in Los Angeles and put them in films. Our first major film commission was for Die Another Day, making Halle Berry’s knife belts and Madonna’s fencing outfit.

ER: How does working for another designer differ from working on a film and from your own work?

WM: On more than one occasion we have gone for meetings with fashion designers and found pictures of our film costumes on their mood boards for the project. Then sometimes we have been to a meeting with a film costume designer who had pictures of our fashion work on their boards. The process for us is remarkably similar, and the two industries constantly feed of each other. Naturally working for yourself is different, as we are not required to fulfil someone else’s brief.

ER: What have you enjoyed and learnt from your film work?

WM: The experience with films has enabled to create work on some incredible bodies and broadened our technical expertise considerably. 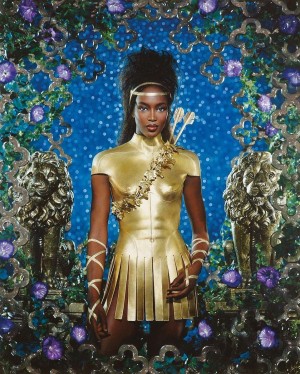 ER: Are you surprised at the popularity of Wonder Woman?

WM: Not really- naturally we always hope the films we work on are a success, we thought it would be popular with women especially as there were a lot of women on the crew & the director set out with a strong feminist stance.

ER: You have described Wonder Woman as the ultimate WM movie project?  -How do you top that?

WM: We would love to work on the costumes if there was a remake of Barbarella.

ER: Concurrent with the film work you have worked with the legendary pop artist Allen Jones who has said of you “They don’t have an equal anywhere in terms of their skill”. How did that collaboration start?

ER: Do you think the sexuality of Allen Jones work has been an influence on your work?

ER: For your first solo show you have produced a new body of work which moves away from fashion and costume and falls into the world of fine art, what has prompted this shift?

WM: We were both keen to make new work again for ourselves and had long felt we wanted to offer something body based beyond clothing, something new we hadn’t seen before.

ER: Your new work would seem to have an LGBTQI influence – how did that come about?

WM: With these pieces we are playing with the limits of physical objectification, we are exploring how, at a high level of aesthetics, the body becomes almost androgynous.

We are not trying to promote body elitism but looking at how regardless of its sex, a highly developed muscular body follows a particular form.

ER: As a couple who work and live together how do you keep a balance?

WM: After 30 year of a relationship and business together we don’t know any different. We are two very different people and, fortunately, we happen to like the same things!

ER: You have named the exhibition Pop Artistans: what does this mean and where do hope to take it?

WM: We have called the exhibition Pop Artisans as we have for 30 years worked in various different areas of popular culture as designer/artisans. We looking forward to taking the Liverpool show forward, with more new work, to London next May as part of London Craft Week and are planning exhibitions abroad.

Pop Artisans  opens on 18th November 2017 at The Gallery Liverpool, 41 Stanhope Street, Liverpool, L8 5RE and runs until the 10th December 2017 – with free admission to all.

The Confessions of a Justified Online Lover