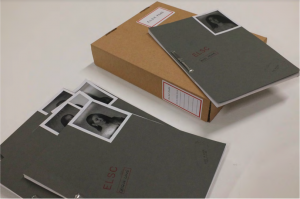 E.L.S.C. FILES is an exhibition and collaborative book project by photographer Julie Cook with the East London Stripper Collective that presents a body of evidence of the social activism of six women, juxtaposing this with the language of photographic portraiture. Presented within the format of the police file, the content includes not just portraiture, but data harvested from social media as a site for participation, communication and public event organisation – challenging the historically conservative stigma and stereotypes that have characterised the public perception of this industry. The work is important in the context of the gentrification of Soho and other less famous contexts for public erotic entertainment for both men and women. The work builds on the theoretical and aesthetic interest of Cook in how women address a culture where public nudity is encouraged commercially on the one hand, but venally criticized on the other. Cook believes that striptease culture can support amateurs; encouraging the performance of sexuality and engaging with the complexities of voyeurism and contemporary issues of the female gaze. It is also a space for the public to see imperfection, rather than some far removed, digitally retouched, virtuality.

E.L.S.C. FILES is an exhibition and collaborative book project by photographer Julie Cook with the East London Stripper Collective, who define themselves as ethical strippers. The work is presented as a body of evidence of the social activism of these six women.