I was never really one for comic books. Both of my brothers would read them avidly: everything from Marvel comics to Manga, but personally I found them boring and stereotypical. Even as a child, I could see that their representations of characters, especially female ones, were unrealistic. 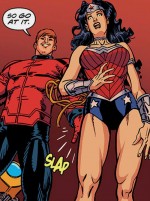 Wonderwomen with tits like artillery shells, virginal Lois Lanes – they all seemed entirely geared towards men and their desires, masquerading as action comic heroines.  Of course, there were powerful women within them – Captain Marvel and Black Widow to name but a couple.  But despite all their super strength and heroic aura they were still drawn with the sort of overtly sexual features that men find sexually titillating.

The only novel I really enjoyed  that transcended both these genres was Le bleu est une couleur chaude by Julie Maroh, which I told everyone was for practice for my French GCSE (but was actually just because I was a lonely queer and wanted to see what other lonely queers got up to).

Society has a particular, slightly discriminatory, view of what comic books need to be – at least in a provocative, sexual sense – and this superior attitude has self-fulfilling effects on what comic book authors themselves choose to put out. In the last 50 years, Marvel hasn’t really changed its representation of women much at all – and probably doesn’t intend to. There are radicals pioneering the fight away from the mundane such as Milo Manara and Roberto Baldazzini. Even so, graphic novels, with some exceptions (Melinda Gebbie comes to mind), have a tendency to be very male-focused; this is replicated in erotic comics.

Baldazzini’s representation of gender is also different: the traditional, über-masculine and über-feminine characters in Marvel aren’t apparent in his work. Instead, there’s more of a focus on the similarities between the two. Casa HowHard sees the introduction of women with penises. Although these could be interpreted as transgender women, Baldazzini prefers to use them as devices to show the feminine side to masculinity. Here the penis is something which is only common to men, rather than something that defines masculinity, and while at first glance they have traditionally feminine ‘comic-book’ features – glamorous faces, suggestive lips and large breasts – the appearance of male genitalia is a visual oxymoron. And it works well.

What differentiates Baldazzini from the run of the mill bande dessinnées adultes or their Italian counterparts is not just the sophistication of their stories. They portray scenarios, which aren’t a mock of fetishism, but more a celebration of it, the opposite of kink shaming. They’re  an extreme middle finger to the world of missionary and, ultimately, boring, conventional sex. 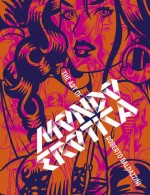 Who Owns the Dropper Owns the Fix