Be upfront about what you’re looking for – and dare to ask others to be
The Georgians were head over heels for Lonely Hearts adverts, while the first ’90s speed-daters were actually the congregation of a Beverly Hills rabbi who had been implored to help them find spouses. What do they have in common? Both sets of love-hunters were clear about how serious they were from the start and thought the ‘let’s see where this goes’ line was a complete waste of their time. We’ve come to believe that being upfront about wanting marriage and kids comes across desperate, especially if you’re female. But following the historical example, I started to sound people out very casually but quite rapidly as to what they were looking for long-term. It worked. The people who eventually wanted marriage and kids didn’t have a problem sharing that. And the way they said it – with embarrassment, hesitation, or even too much eagerness – gave me even more information about the gap between their idealised intentions and their readiness to make them happen.

‘Live alone and like it’
Live alone and like it was a 1937 guide by the author Marjorie Hillis to the single girl life, giving tips on everything from using the ‘wireless’ or phoning a friend for comfort, to avoiding contacting a man you were not yet engaged to and stocking a home drinks cabinet without appearing a lush. It pre-dates Helen Gurley Brown’s Sex and the Single Girl while making recommendations on nightwear (‘a woman who goes to bed as if dressed for a lover is rarely without several’), the etiquette of coming up for nightcaps (‘we know you’re at it’) and not having affairs before 30. Perhaps the most sage piece of wisdom when it came to arranging dates? “The best rule is to make your invitations worth accepting and not to care what the man thinks so long as he comes.”

Chaperones have their place
The First World War put paid to chaperones –  after all, running to an air raid shelter with a maiden aunt in tow soon became entirely impractical. But in the 18th and 19th centuries, chaperones weren’t just there to police female behaviour – they were also there to give a clear-eyed assessment as to whether the paramour in question had the right intentions, whether they’d be a good fit for the lady, and if they were compatible with her friends and family. So before I committed to my now-boyfriend I took him to a festival where my university ‘dad’ – a friend who’d seen me through half a dozen heartbreaks – could assess him. Over the course of three days, through the anoraks and sequins, constant intoxication, and sodden English weather, my boyfriend was scrutinised by someone who knew me and my foibles best. His nod helped me gain the confidence to go forth.

Spread your eggs (metaphorically speaking…)
I had always thought the concept of simultaneously dating a handful of people came from the Americans, but at the beginning of the First World War, good British girls exchanged flirtatious letters – and had sexual liaisons on release – with multiple soldiers with the intention of seeing who returned alive. What’s more, everyone knew about it: “Darling, You now have a real life lonely soldier somewhere in France. Only he’s not very lonely. Also it’s beastly conceited to imagine you hadn’t got several others” (letter from 1917).

I’d always thought I didn’t have the emotional capacity for it, but it worked wonders – mainly by stopping me getting overly attached too soon to anyone I was trialling.

Don’t go on holiday with a fling
It seems innocent enough – you’re both seeing other people and open about it, and don’t pretend you have a future together, so why not have a little adult fun in the sun? Answer: because, if deep down you’re looking for a long-term relationship, there’s something about going to an idyllic location where you’re frequently mistaken for a couple that will make you pine for genuine love and invested companionship – as a Woman’s Weekly from 1914 advised. Incidentally, I found this out myself when I accepted an invitation from my Sardinian fuck-buddy to spend in a week in his homeland with him. After one diatribe too many about the uselessness of romantic love, and his imploring me to be his swinging partner when we returned to London – “you’re a great token” – I sent him packing for good.

Fever pitch?
At the outbreak of the First World War, newspapers were full of salacious stories about young girls suffering from ‘khaki fever’ – rambunctious desire for soldiers in fatigues. But the truth of the story was more complex. There had always been soldiers in circulation. Instead, the women in question were more akin to groupies, and wanted a piece of the war action themselves (interestingly, khaki fever abated as they took up jobs themselves). By comparison, I was struck down with a bout of ‘record producer fever’. In each and every instance I became infatuated with the guys on pretty much no other condition other than their career label. Then one day I realised that the reason I was drawn to them is because I wanted to resurrect my own long-neglected musical doings. And when I did? The ‘fever’ vanished.

Let yourself be wooed
This sounds obvious, but for us millennial feminists brought up on a diet of Buffy the Vampire Slayer, Daria, and school history lessons on the Suffragettes, allowing oneself to be wooed was the equivalent of giving up the right to vote or adopting the manipulative tactics of The Rules, the best-selling ’90s dating guide endorsed by Oprah, which demanded dumping a man unless he brought you a romantic gift for your birthday and failed to propose within a year.

By contrast, the most successful relationships in history came about by investing time and effort in the courtship process – with the pursuer accountable while doing it. With the exception of wartime, the ideal courtship length right up until the 1960s was two and a half years – six months’ pursuit, and maximum of two years’ engagement, with parents often met moments before embarking on a first date.

Married life and the diminished age expectancy aside, the focus of wooing was on the thoughtful planning of activities, plus the winning over of one’s friends. Processing this, I soon understood why an invitation to take a stroll up the canal on a sunny day was better intentioned than a request for cocktails at the same touristy bar arranged three times in a row, one hour before each date.

Oh, and a note on communication: don’t underestimate the power of your voice – and the personal connection of a phone call – when it comes to winning someone over. A few minutes on the phone can convey far more than a 30-minute Whatsapp chat.

Dance with them
Despite the popularity of Strictly, we might just be living in the least dance-savvy age since records of formal dancing began. From Georgian balls where hands could only be touched through gloves and after a formal introduction, through the jazz-sodden Twenties where white women danced with black men for the first time, dancing has always been the sauciest thing you could do with your clothes on, and the greatest aphrodisiac.

But apart from the odd festival or Christmas party, how many of us dance on a regular basis – let alone in a choreographed flow with a partner?

Like many a seven-year-old, I once harboured fantasies of being a ballerina-cum-musical theatre star. But comments about the girth of my thighs had snuffed out the light, and I would only dance while inebriated a couple of times a year until my boyfriend asked me to an outdoor salsa session for our third date. The boy could move. He could lead. It seemed awkward to touch someone I had not yet kissed, which is illogical when you think about it, but it was entirely delightful. And what’s more, with so few men having cottoned on to the greatest seduction ruse of all time, he was in demand, which ever so subtly piqued my jealousy and made me realise I was interested in finding out how else he could move his body.

Nichi Hodgson’s new book The Curious History of Dating, from Jane Austen to Tinder, published by Robinson, will be reviewed later this month. 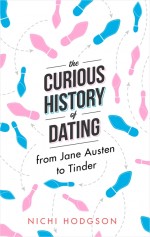