May 12, 2015February 18, 2021 Editor 6297 Views 0 Comments
It was the breast of times… a new book about breastfeeding reminds us that those hooters have a more serious raison d'être.

“Anyone game?” said our book editor, casting an inquiring eye around. I’m idling, glaring at the grey stuff which I just know is coming my way and glumly thinking that I should never had admitted to quite liking 50SoG.
“Well I’m a bloke,” said our political editor, our international editor and our editor nodding vigorously in agreement, showing an entirely understandable solidarity.
“Err… I’ve not had a child,” demurred our sensible deputy editor.
“And Copstick?” someone suggested, “didn’t she bring up Mumsnet in one of her pieces recently?”

You can see where this is heading can’t you? The office resounded with merriment at the worried look on book editor’s face at having to ask Copstick to look at this. Gradually the mirth subsided and they turned to me. “You’ve had lots of children Kate (two, actually), and you breastfed, right?”

Melissa Addey’s 100 Things to do while Breastfeeding is a surprisingly polished affair for a self-published book. Publishers beware, as the self-pub market has become a proper business and writers and novelists who are frustrated with the ponderous responses received by a cowed publishing community are benefitting from this new slickness.

As an ex-marketing employee of Sainsbury’s, Melissa knows her stuff: she understands how a product should look, where it should be placed and who is going to buy it. She’s a very clever woman indeed. She’s also a skilful writer with a chatty manner and a nice, easy-to-read style. She’s the mate who is sweetly dispensing advice, just like a good mate should. Both the NCT (National Childbirth Trust) and Mumsnet have given this guide their nod of approval. The Mumsnet community is a strong one, let’s face it: they’re probably single-handedly responsible for 50SoG and its ilk becoming so popular, and Melissa is very active within that community. Though what staggers me is that she’s doing all this stuff and taking care of two small kiddies, one three months old, the other a toddler. So those are her indefatigable credentials. As for the guide, well, in the main, it’s straight forward and practical. Advice such as painting your nails, baby massage, reading, catching up with emails, dying your hair, going to galleries, a film matinée perhaps? The list is endless. Perhaps I should add that this advice is largely for women who are confident with their breastfeeding – those just wishing to gaze upon their child because they’re too exhausted to do otherwise might find some of the suggestions too arduous. I also wondered about sex and lactating women? A question our favourite Blonde Feminist asked recently (well that and wipe-clean clothing – can you see a theme here?) other than the suggestion of studying the Kama Sutra there is no mention at all. And seeing as this is the Erotic Review I have found an appropriate and inspiring image (see above) of another thing you can do while breastfeeding. Any further suggestions, cheerfully received in the comments box below. 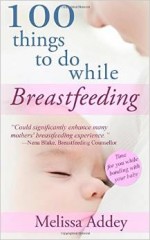 An Interview with Abigail Ekue

No Fun in Sex Anymore?