Wordsworth, Dickens and The Scarlet Pimpernel ’s author, Baroness Orczy noted that between London and Paris in the 18th century there existed a dangerous traffic in people and ideas. In the Victorian era, in the 1840s to be precise, Her Majesty’s Theatre in the Haymarket welcomed the stars of the Romantic ballet from the Paris Opera, making little Marie Taglioni and Charlotta Grisi household names in the London of that era. More recently, with the cultural tide following back in the other direction, Paris may have been slightly miffed when overlooked for the Olympics, and been even more mystified by its evident success. Mon dieu! 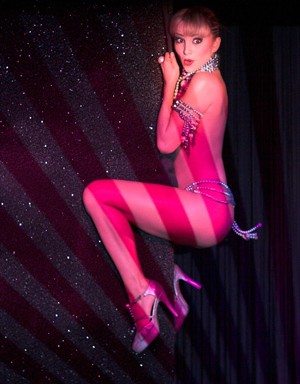 Behind the National Theatre you enter a Belgian spielgeltent, welcomed and seduced by its array of chandeliers, mirrors and trippy waitresses. Inside, the company of ten dancers waits to entertain Londoners with the chic and charm of their Parisian cabaret from which they revisit famous routines, conceived at first by Alain Bernadain, its founder, with newer numbers created by Patricia Folly and Philippe Decouflé who cut his teeth as a contemporary dance choreographer. Today there are raised eyebrows in the world of contemporary dance. He has obviously gone over to the dark side.

After a black and white film of life backstage, their famous opening number God Save Our Bareskins starts the show in witty display of marching routines celebrating the guards at Buckingham Palace with everything on offer above the dancers’ little boots inviting us to stand to attention. This is followed by brief routines – solos and ensemble – in which the strutting precision and elegance of the dancers – all legs, arched backs and no bosoms – is caressed and dissected by the sensitive and intelligent lighting that hides as much as it reveals – dappled here, criss-crossed there in Scanner, Legmania and Purple Underground. Decouflé’s Crisis! What Crisis?, presented towards the end of the first-half, offers serious relief and therapy for the tensions of the present financial chaos. Bankers, your troubles are over, or maybe they are just beginning…

After the interval Decouflé’s trademark trompe-l’oeil is put to good use in Upside Down: here smoke and mirrors and multiplies the near naked-bodies. Real flesh and mirror image merge in delightful concupiscence, so that you just can’t see the join. Another undoubted highlight of the second half is the percussive comedy – tap for four hands – of Up and Over It, as the Irish couple, Suzanne Cleary and Peter Harding ‘disintegrate’ after a chaotic night of cocaine and champagne.

The show is brought to a teasing close by Bernadain’s Baby Buns, with its provocative celebration of polka dots, and U Turn Me On. Hmm, well, yes, mostly, they do – a show for men and women, the acme of sophistication presented with immaculate production values. It is erotica as fine art, the haute couture and cuisine of striptease, and as such, one of Paris’s many gifts to the world. It is worlds apart from the spectacle of British burlesque, but then some people prefer home cooking.

Some Feminists are more equal than others