February 22, 2016March 22, 2021 Editor 5883 Views 0 Comments
Maestra is hotly tipped to be the next Fifty Shades of Grey but with the merciful addendum that it’s been written by L.S.Hilton who can write brilliantly. And with Amy Pascal’s production company handling the film adaptation, you can be sure that this’ll be a proper blockbuster. Move over Anastasia, there’s a new Queen of kink in town… and she knows what a butt plug is. 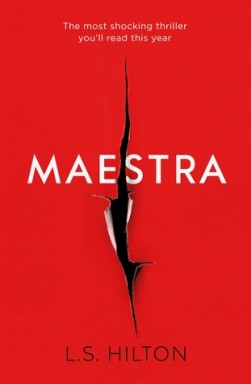 Can you be inured to shock? You would suspect that after reading reams of filth, I’d become completely numb to all descriptions of sex – that descriptions of men, women or beast licking the sweet slit of so-and-so would make me yawn. Donkeys and women? Been there. Watersports? Old hat. Blood play? I’ve got a rough idea of what we’re dealing with but sorry, there’s a cup of cocoa with my name on it downstairs so can we wrap this up?

But if it is unexpected, anything can be shocking. And the mastery of Maestra is that even though you know there’s sex coming, you can’t anticipate it. And even better, by the time you think you’ve sussed how the next scene will play out, the rules have changed and our heroine, Judith, is doing in the guy she was fellating moments ago. Whiplash doesn’t cover it. You find yourself re-reading pages thinking, “Was there any clue that this was about to happen? Did I miss something?” You didn’t miss anything. That’s just the feeling of genuine bamboozlement. And it is glorious.

Possibly more glorious than the orchestrated surprise is our protagonist, Judith. She is every intelligent girl in her twenties, struggling to get by in London, who has a mania for sex parties, doing a job in a field she’s passionate about. Ok, maybe not every girl. But like everyone saddled with a mountain of debt at the beginning of their career, she considers how she might make her life a little easier. And unlike most, she becomes a companion in a bar in St James, taking a cut of every bottle of champagne she has bought for her. She gets to walk away every night with a healthy wad of cash that allows her to keep working in a job where she’s bullied and her opinions are ignored.

Doesn’t sound like much of a fun read, does it? Yet Judith’s attitude towards her situation is immensely satisfying. There isn’t an ounce of moralising or soul-searching just the practicality of overcoming obstacles and getting what she wants. You want her to succeed because you yourself want the courage to take what you want in life without the hand-wringing. Or at least, I do. The catharsis of reading a narrative where the protagonist disregards the rules of polite society and makes a beeline for the quickest (if not cleanest) route to respectability and financial security gets you through another week in Britain’s expensive, miserable, grey metropolises. What else is fiction for?

Fortunately, Judith doesn’t get trapped in London. We follow her around Europe with her flawless French and impeccable Italian as she becomes embroiled in an art scam and finds her niche in the job market as a criminal mastermind. I admit to not following the fraud element of the storyline as closely as it deserves. I was too distracted by what might be over the next page. And by that I don’t mean just the sex.

There’s a touch of the Girl With the Dragon Tattoo about Maestra. Yes there’s the fearless female character aspect but also the constant reference to stuff. Instead of Ikea it’s Prada and Ferragamo. The commercial aspect is entirely enjoyable. An element of chewing-gum for the mind mixed in with intelligent writing and interesting references to the art world makes this the perfect pool-side/commuter read. However, one slip-up made my cocoa go down the wrong way.

As Judith sits in Portofino considering her next move, she orders a Bellini, a cocktail that’s frankly a waste of good prosecco. Prosecco, mind, not champagne. As any fule kno, the Bellini was invented by Giuseppe Cipriani, founder of Harry’s Bar in Venice. Its pink hue reminded him of Venetian artist Giovanni Bellini’s painting of a saint’s toga, hence the namesake. But when Judith orders a Bellini, it’s made with champagne. Maybe Hilton is trying to highlight how horribly tasteless and vulgar Portofino’s wealth can be. But what sticks in my throat is that Judith actually likes it. She thinks it’s delicious.

But it wouldn’t. It would be disgusting.

Can you be desensitised to writing on sex? If you read enough of it then yes. Fortunately authors like L.S.Hilton will always be around to cushion it with flair and intelligence to make it a real pleasure to read.

But getting the recipe of a Bellini wrong? Totally shocking.

LIFTING THE HOOD – COMING OUT AS A FETISHIST