Fans of Bridget Jones and Girls, rejoice: there’s a new kid on the block. Melissa Pimentel’s Age, Sex, Location is a wonderfully fresh romp through the modern dating scene, where one wrong left swipe could throw all chances of happiness down the pan.

Lauren is 28 and is emphatically not looking for love. Recently divorced from her college sweetheart, she’s moved from Portland to the Big Smoke and into a dingy room in Old Street.

One morning, while cooking up a post-coital breakfast for a crusty-eyed one-nighter, she’s greeted with horror: ‘they thought it was an elaborate ruse on my part, a trap to ensnare them into a life of urban fidelity’. This becomes a pattern as every man she meets seems convinced her pesky female hormones are latching onto them, driving in the deep claws of potential marriage. Mark Corrigan-style, these blokes are either desperate to convince her they’re top-notch, tie-the-knot material or terrified she’ll do the same to them. It’s a conundrum, all right. And Lauren, God bless her, just wants the fun, the flirting, the happy-hour cocktails and the chat.

Pimentel’s semi-autobiographical ‘sociological experiment’ becomes the solution: a test whereby Lauren approaches future dates according to the rules of a whole plethora of dating guides. It’s an interesting idea and one, I’m sure, intended to shame such guides for the money-grubbing load of tripe they so often are.

London, another key component of the story, is virgin territory for Lauren, her ‘fabled land’, where she’d ‘managed pull herself onto its shores like a shipwreck survivor’. Dating’s one thing, she realises, but getting to the very essence of her city is a different ball game: she feels a ‘constant low level guilt for not spending every free moment gallery hopping and attending free experimental jazz concerts’, but ‘after a few months I realised that no one who lives in London actually does any of those things. Time Out is basically just a list of things you might have gone to if you hadn’t been so busy getting drunk in your local or nursing your hangover in your living room. I felt infinitely comforted by the thought’. Among the adventure and the humour, the social observation and the rolling of the dating dice, Pimentel also intersperses some pertinent dialogue on the nature of moving to a new place.

So, will Lauren’s experiment work? Will she find the boyfriend she doesn’t want? Are the 12 pound whanging 99 guides worth the money she spaffs on them, or will ‘rancour, sarcasm and capriciousness’ pay off? Have a butcher’s at Age, Sex, Location, a terrifically fun book from an author we’re sure to see more of. 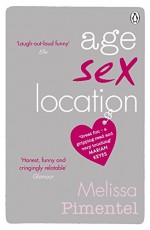 Postcards From The Edge 10

Grow your way to better sex