Samuel Johnson once wrote “No man will be a sailor who has contrivance enough to get himself into a jail; for being in a ship is being in a jail, with the chance of being drowned.” I have to say that I’m rather with the good Doctor on that one: the concept of high life on the ocean wave may be a fine one, but when it comes to the realities of modern cruise ships, I’d rather be an armchair sailor.

Now this ambition has been perfectly realised by Mark McCrum’s second whodunit in the Francis Meadowes series, Cruising To Murder.  As the luxury liner Golden Adventurer makes its way down the West African coast, far from first world regulation, mysterious deaths mount up on board. Meadowes, the mixed-race crime author, is once again asked to employ his advanced deductive skills to identify the culprit. As guest lecturer, he rubs shoulders with the pampered passengers at the same time as having a more professional relationship with the crew.

McCrum captures the claustrophobia and subtle tensions of the enforced socialising between very rich (and not always very pleasant) passengers brilliantly. The various ports of call are depicted with the educated eye of a seasoned travel-writer, which indeed McCrum is. The twists and turns of his plotting will satisfy the most exacting aficionado of this genre and the denouement is enjoyably unexpected.

Cruising to Murder is an excellent follow-on to The Festival Murders, set amidst a literary festival where authors and critics become either victims or suspects. The second appearance of the author-sleuth augurs well for the Francis Meadowes mysteries becoming a classic of the genre – and perfect for reading from the relative safety of, say, a Mediterranean beach. 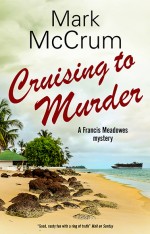 Down At The Old Doom Bar: Postcards from the Edge 25