We all love a fairytale ending.

We hate fairytale endings because, really, they suck.

So says (rather more elaborately) Helen Croydon in her latest book, Screw the Fairytale: A Modern Girl’s Guide to Sex and Love. Her view is that fairytales always end when the Prince kisses the Princess, because the rest of the story is so crotch-witheringly dull.

She looks at the various ways in which today’s women (and men) are still pressured by society and body chemistry into thinking that a relationship modelled upon the nuclear family is the only way to truly happy coupledom.

So why not abandon all thoughts of finding The One? What’s wrong with serial relationships, none of which have to end in Wagner’s awful march? Why not a grave handshake or a sober peck on the cheek, and then, Geronimo! – you’re skydiving towards your next 18-monther. 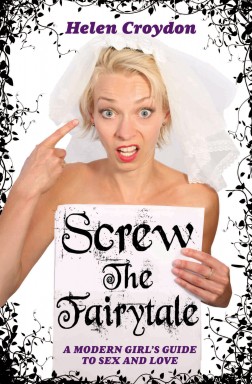 Croydon wrote in the New Statesman, “Like (Cameron) Diaz I, too, would rather retain my single status with a few rewarding lovers to fulfil different needs at different times of my life. Relationships can be a nice addition to contentment but they no longer have to be the main ingredient.” Surprisingly, despite this magazine’s progressive and liberal readership, there was an almost unanimous howl of protest from commentators at the general tenor of her argument.

I found Screw the Fairytale to be more of a voyage of self-discovery than an illuminating Modern Girl’s guide, with not many answers as to why the course of 21st-century true love never does run smooth. Readers learn, as they did with Croydon’s last book, Sugar Daddy Diaries, a fair bit about the author as she skilfully negotiates the relationship rapids. But we are swept along on her journey, willing travel companions, discovering with her yet more strange groups, weird terminology and some really rather touching individual human beings.