March 3, 2016March 22, 2021 Editor 6009 Views 0 Comments
As chilling as it is funny, Charlie Kaufman’s new animated feature leaves you with the same uneasy feeling as Being John Malkovich in half the time.

Fans of the cerebral and weird Being John Malkovich will be familiar with screenwriter and director Charlie Kaufman’s fascination with puppets. Before Kaufman had to contend with using real people as the puppets, now he’s a real puppet master. It’s almost a shame to give even the premise away as seeing the story unfold is a pleasure in itself. Kaufman is a born story teller although you can feel like he’s dragging it out a little. But the intricate nature of the stop-still animation and puppetry is enough to keep you quite comfortable in your seat. For those who relish the thought of being at the mercy of Kaufman’s genius: stop reading here. For those you need more convincing, read on.

Our protagonist Michael is an expert in customer service. His book is best seller and he tours the country giving lectures to help call centres improve their productivity by 90%. In lives in an odd world; Michael (voiced by David Thewlis) seems to be the only person with a unique face and voice. Except for different hair styles and clothes, everyone else looks and sounds the same. Until, that is, he meets Lisa (Jennifer Jason Leigh), an anomaly of sorts because her voice and appearance is unique. Zest for life renewed by this discovery of this anomalous woman, Michael considerers his future and his upcoming speech. 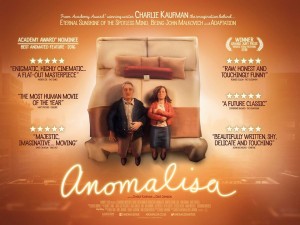 To give away any more of that would ruin the experience of this film. Needless to say this is prime Kaufman. You leave the theatre with the feeling that the universe has re-aligned itself. Your understanding of good and evil and love is either reversed or you’ve abandoned the concept altogether. It’s a real kick to the head that leaves a bloody but sweet aftertaste in the mouth.

For fans of stop-still animation: you’ve hit the jackpot. It can’t possibly get better than this. One scene in particular (possible because this is the Erotic Review) sticks in my mind – a sex scene between Lisa and Michael. This scene is a blessed juxtaposition to the over-the-top sex-scenes usually found in puppet productions as in  Hand to God (currently on the London stage) or the wonderfully ridiculous Team America: World Police. Yes, puppets doing the dirty has immense slap-stick value but the fact that you can use puppets to create a genuinely beautiful and moving scene that involves sex? Now that’s what I call talent.

Anomalisa is an anomaly in itself. With Hollywood abandoning the film format in their droves, opting for the increasingly profitable market of HBO deals and box-sets instead, getting the funding needed to produce these slices of freely artistic perfection gets harder with every passing year. But Kaufman and his team shunned the traditional production routes and capitalised on the rising popularity of crowding funding to raise funds for creative endeavours. The Kickstarter campaign raised twice what it needed. Unfortunately for undiscovered talent in the film making world, Kaufman’s cult-status after Being John Malkovich and Eternal Sunshine of the Spotless Mind put him head-and-shoulders above other projects seeking their initial boost.

And quite rightly so.

Rioting all the way to the bedroom

Every Sperm is Sacred. And Delicious.