Remember the fairytale about the girl and the penis bush? No, me neither.

But the premises of the nine and a half “fairytales” in Grow A Pair are swollen with surreal eroticism and a weird, lavish imagination.

Grow A Pair is a short story collection a little like The Bloody Chamber after a couple of gins. ‘A girl passed a penis-bush growing in someone else’s garden, and picked a ripe dick because she couldn’t resist it’ – it grins at you from page one.

Sex in Grow A Pair is lively, dangerous, and rather funny. It’s a positive menagerie of wild genitalia: ‘vaginas of every colour flew from tree to tree, flapping their delicate labial wings’; dicks holler and swear; orgasms can be tapped like little-used letters on a keyboard.

And that wicked imagination also satirises the art of loving: pushing boring dates off cliffs, skewering lesbians to death on a detachable penis and sentencing ex-lovers to death by orgasm.

There are serious turns too – a sinister monologue from the brothel, and the collection’s resonant afterword – as well as an opaque short about spam emails.

But even in its straight-faced moments, Walsh’s book is transporting, and touches a corner of your brain rarely accessed by most contemporary sex writing and blogging.

“Life isn’t a fairytale,” the authorial voice admits in her last story. She nods to the nature of this imaginative world so much like the first shags after ‘I love you’: imaginative, hilarious and deeply fulfilling.

For my money Joanna Walsh is one of the best young writers on Twitter now; Deborah Levy cites her as ‘fast becoming one of our most important writers’. 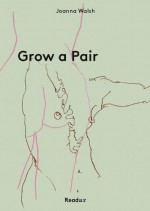 A BOOK ABOUT SEX BEFORE ITS TIME