In a country where heterosexual hand-holding in public is considered distasteful, Lotte Hoek explores an underground culture of ‘cut-piece’ cinema, in which short, pornographic scenes are spliced into a film and shown to audiences behind the back of the draconian censor board. Her book, Cut-Pieces: Celluloid Obscenity and Popular Cinema in Bangladesh is an ethnography of a particular film called Mintu the Murderer, from its production to its reception in Bangladesh.

Released to the public on Eid, the most religious day in the Muslim calendar, the film sparked outrage in the mainstream media as small-town audiences used their day off work not to venerate the almighty Allah, but instead to stare for precious seconds at the holiest of holies.

Hoek takes us through each part of her experience with the film: from its conception, to scripts and casting, to its glorious reception in a cinema hall in the small town of Feni. At all tiers of society, the film is accepted at some level. Working class audiences cheer when the cut-pieces are aired. Of course they would, they’re a smutty lot. But Hoek shares a revealing anecdote – whilst waiting for the film to start, she spots two policemen in the cinema. She suspects that the projectionist is waiting for them to leave; in turn they ask if the white lady could please be ushered out so the film can start?

The cut-piece film creates a space where these social double standards are freely expressed. Even Raju, the manager of the sordid cinema hall in Feni describes the cut-piece film as ‘vulgar’, despite conceding that they are what the audience wants most. He says “Films wont run without cut-pieces… only with vulgar films containing cut-pieces do you get a repeat audience. That’s where the money is made.” 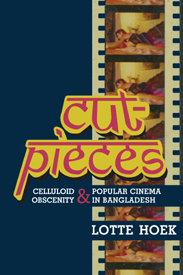 Hoek’s evaluation of the various circumstances she encounters is engrossing. In a way that is rare for such a thoroughly academic project, she keeps the book alive by deftly interspersing the more serious text with funny anecdotes. Such a careful, yet lively, analysis of cinematic culture in Bangladesh deserves high praise indeed.