It has always seemed to me that a good short story should appeal much more to the reader’s sense of film than of prose. It should act as finished screenplay rather than elaborate narrative in terms of the stimulus and response. Much has to be conveyed in a short space and a complete way without overloading the text. Of course, film has the ability to mix and match sound (including silence), vision and word, which enables the medium to condense or stretch narrative content at will.

The novelist has the freedom (or compulsion) to fill the pages with as much description and dialogue as they choose or are allowed. The short story writer must be astute about the precision of language and the use of the ‘space between words’ – an element of construction that articulates less so the reader can interpret things for themselves. It is not an easy trick to pull off. Most often one is left feeling short changed. ‘So what happened?’. It’s not that everything needs to be tied up with a bow. Rather, that as with a piece of music, the movement has to come to a conclusion satisfying in itself, whatever more is to follow.

Many years ago, a mentor of mine observed that ‘there is no gentleman like an American gentleman.’ I knew what he meant. Although a peculiarly East Coast phenomenon, I can add that ‘there is no writer in English like an American writer’. Early on in my reading career I found Twain preferable to Dickens and Henry James to Trollope. Later of course came a cornucopia of writers both populist and recherché. My humble view, whether Auster or Updike, Chandler or Vidal, is that American writers at their best share many admirable qualities. They have a notable clarity and directness of expression. They are observant of and sensitive to the nuance of their society. It is no accident I think that most of the great and widely read sociological studies and narratives of the 40s and 50s (Warner – Levittown, Reisman – Lonely Crowd, C Wright Mills – White Collar: The American Middle Classes) come from American academia. The deal is, you tell it like it is but with thoughtfulness and insight. Both fiction and social narratives have a culturally intrinsic, muscular delicacy, peculiar to the American story.

David Means in his new collection of short stories Instructions for a Funeral sits firmly in the tradition of high quality American prose writing. His always credible characters and locations are diverse in context and storyline. The narrative is both observational and, to a degree, surreal. In his stories’ capacity to (entirely effortlessly) establish a visual accompaniment, they strike me as the prose equivalent of an Edward Hopper painting. There is a melancholy empathy and a hint of irony in these stories. They reflect many aspects of the human condition that we may or may not share. They lead us through in good order and leave us with an understanding in a reasonable period of time, free to move on if we wish. They do what short stories should do – and maybe one (or more) of them should become a movie. 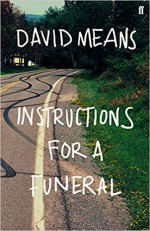 A Lesson In Sexting