What if I told you an inconvenient truth; that a flourishing, unwavering feminist movement was an unanticipated consequence of the Islamic Revolution in Iran. This is the starting point of Jewels of Allah, the Untold Story of Women in Iran, a book recently published by Nina Ansary.

It is inspired by Ansary’s academic work, researching the feminist movement in post-revolutionary Iran for a PhD in Columbia University. She lists a series of misconceptions about Iranian women in the first chapter and goes after them one by one, trying to rectify the stereotypical assumptions.

It was her book trailer video that I saw first, a very emotive film that made me choke (watch here).

Nina Ansary is poised. She carries herself with the confidence that, in itself, tells a story. Her mission is to lift the veil from Iran’s successful women. In Ansary’s view, the standard narrative about Iranian women that talks about an upward trajectory during Pahlavi era which was extinguished at the arrival of the 1979 Islamic Revolution, is filled with “convenient half-truths”, where the real story is “more complicated, unexpected and less tidy”.

The book’s epilogue catalogues more than a hundred successful Iranian women inside and outside the country, from Oscar-nominee Shohre Aghdashloo to triathlete Shirin Gerami to author Azar Nafisi and Google’s “Security Princess” Parisa Tabrizi.

Jewels of Allah, The Untold Story of Women in Iran, by Nina Ansary published by Revela Press. ISBN 0986406414.
Available in hardback, paperback and Kindle editions. 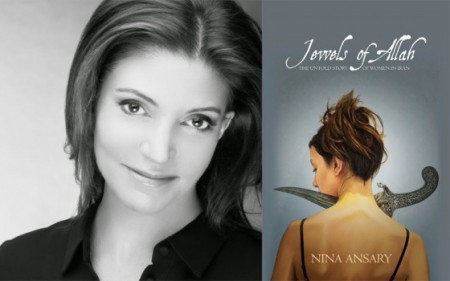 100% of all proceeds from the sale of the book will go to various charitable organizations and institutions, with the primary recipient being the OMID Foundation, a 501(c)(3) registered charity that has been empowering disadvantaged young women in Iran for over 10 years. For more information on the OMID Foundation, please visit: www.omidfoundation.com

THE OLD DOOM BAR | POSTCARDS FROM THE EDGE – 23

DOWN AT THE OLD DOOM BAR: POSTCARDS FROM THE EDGE 27