November 11, 2015February 18, 2021 Editor 7110 Views 0 Comments
Director Gaspar Noé seats us approximately where the cervix should be to wait for the inevitable cum-shot that splutters towards the audience in gruesome 3D. Does this intimate seating arrangement teach us anything about love?

Murphy, an American film student in his early 20s is living with his partner, Omi, and their child in Paris as he laments the breakup with his ex-girlfriend, Elektra. He receives a voicemail from Elektra’s mother telling him that she’s gone missing. Instead of going out to look for his ex, he indulges in a set of opium-induced flashbacks. 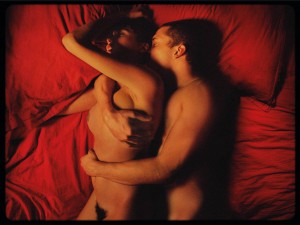 The protagonist, played by Karl Glusman, is throughly dislikable. True, a character isn’t believable if they are devoid of flaws but between his inability to appreciate his new life as a father and his pretentious tastes in cinema (which he shares with the director, Gaspar Noé) he possesses only flaws. Glusman’s portrayal of a man’s self-obsession is perfect. His co-stars, Aomi Muyock as Elektra and Klara Kristin as Omi are remarkable, especially since neither has previous acting experience; Noé picked up Muyock in a night club and Kristin at a party. Despite the director’s unorthodox approach to casting, the trio complement each other and portray exactly the sort of antics that would arise between three beautiful, aimless youths swanning around Paris.

What sort of love is Love showing us? The Ancient Greeks separated fluffy emotions into four categories – eros, storge, phileo and agape – which they reckoned blend together to produce long-lasting relationships worthy of celebration. Love fixates on the most passionate and selfish form of love: eros. The result is spectacularly French. Elektra speaks to Murphy in English, despite his fluency in French. Murphy utters, “I love Europe” on discovering that Omi is just shy of 17 before having sex with her. There’s lots of screaming. There’s a threesome. Etc., etc.. It’s all very passionate but there isn’t any self-sacrifice. Murphy couldn’t give a flying saucisson for Elektra’s happiness. Omi would rather ruin a young man’s life than question her own morality. Elektra just wants Murphy to fout le camp. Nothing worth celebrating there.

Fortunately, because of the film’s achingly earnest tones, the result is brilliantly funny. The weirdness of the 3D sex experience juxtaposes hilariously with Noé’s aspirations as auteur. 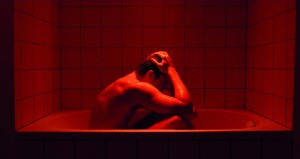 While the sex scenes are delicious we are left wanting a narrative where we could at least root for someone, or something. Half way through the movie, the chronology becomes too garbled to follow. Consequently, we find ourselves unable to work out how much we should be hating Murphy and whether Elektra deserves any sympathy. Although the effect of scrambling the timeline produces the heady confused feeling of a pharmaceutical high, it does little for our patience and desire to find out if Elektra will turn up. And you can forget about poor Omi.

Even if Gaspar Noé could get us into the same room with naked Murphy, Omi and Elektra, even if we could smell the sheets and touch their nubile bodies, or climb into Elektra’s multi-dimensional vagina we probably wouldn’t want to.

Well, maybe we would. But not for very long.