Some while ago, I commuted regularly to New York. After a lacuna in my visits I was in a Yellow cab from Newark Airport to Manhattan. ‘How are things here nowadays?’ I asked.

‘Well pal,’ the driver replied, ‘it sure ain’t Plato’s Republic.’

That was then and this is now. Neither the USA nor Britain can claim to fit Plato’s ideal of state governance. The authors of this lucid and crisply written analysis bring to our attention the origins of democracy in 5th century BCE Athens. Their comparisons with the Britain (and indeed many other formal democracies) of to-day are balanced but not always complimentary.

The book is up-to-date enough to include an interview with Dominic Cummings. This is appropriate because much of the historic commentary on Athenian ideas of democracy and the art of politics came from Thucydides – a favourite of the Prime Minister and his adviser. One doubts they revere the great historian and general as much for his ideals as his grasp of how power is won and sustained, and electorates managed.

Other states are frequently noted as exemplars of specific points, notably the apparent ease by which demagogues have risen to absolute power in functioning democracies – Modi, Orban, Erdogan, Trump et al.. But it is the UK that is the primary focus and within that the process by which we arrived at Brexit – in whatever form that event exists at the time this book and review go to press. Most remarkable is the congruence and therefore relevance of the Athenian understanding, expression and on occasion abuse of democracy to our own. To be sure, parallels must be treated with caution, but even when considering the impact of the mainstream press, the internet and social media, there is a comparison to be made with the Athenian Pnyx, or public assembly, where citizens were summoned to be harangued by demagogues and vote on propositions.

Of particular interest is the reminder that Athenian democratic process allowed for a rethink of the popular vote as with the change of heart over the proposed massacre of the Mytileneans. It is baffling to reflect that David Cameron (an Etonian who one might suppose knew his classics) and his successor set in train a process that admitted no political or legislative prospect of voters reconsidering their referendum choice. There has been no orator to put the case for remaining, no Diodotus with united supporters to oppose Farage’s Cleon and the Leave cohorts. Now, at the probable end of the struggle and notwithstanding the Pnyx of Parliament Square the rescue trireme of a second referendum seems unlikely to dock before our relations with the EU are slaughtered.

The authors have admirably stuck to their brief. They have foreborne to push parallels too far or too contentiously. But the reader will have much on which to reflect. Not being a classicist this reviewer supposes that some people may challenge the parallels. One thing that Scott and Makres are very firm about is that despite inevitable human imperfection we can and must rally round to protect our imperilled democracies. The United Kingdom of Great Britain and Northern Ireland is sadly, not Thucydides’ democratic Athens. Unless of course the Pnyx of a General Election produces a clear result. 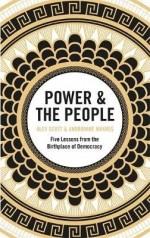 Tom’s Dicks and Harry’s, too