Fucking Law is Brook’s own ethnography, her study of sex, knowledge, and the experience of fucking. But she divorces herself into two identities in the book. On the one hand, she talks about her experiences, particularly on le Cap d’Agde, using the first person: ‘You think my eyes cry with laughter and with tears, and it is my pussy that craves and drips, but it’s the other way around. How could you be so wrong?’ On the other, italicised intrusions seep into the narrative as she talks about her body and her fucking as if it were someone else’s: ‘She ground her hips into the sand, feeling the walls of her sticky cunt rub together, as she looked right into the eyes of a man at the back of the beach’.

Much like the Cap—a nudist beach and the site of much fucking—this book is something of a transgressive space, which sets out to upset your knowledge and experience of fucking. Brooks’s narrative ejaculations come in and out, like a tide. This isn’t a work of academia in the traditional sense, but something extremely personal. Brooks bares it all, metaphorically lying down on her own Cap, spread-eagle, for us all to stare at every crevice, hole and curve. In Fucking Law Brooks is concerned with how kind you are and should be when you fuck, but she’s also concerned with what kind of text she’s writing.

It’s a fascinating read, with a fucking-rhythm that oscillates from fast-paced sex-diary-cum-confessional to high-brow analysis of philosophical theory (especially Gilles Deleuze). It’s also sad. Charting a failed relationship with one of her academic inspirations (who’s married, a father and forces Brooks into all kinds of polyamorous adventures against her will), Fucking Law also reminds you how fucking can fuck you up, make you fall in love and make you desperate for kindness and for the fucking to be kind. The voice of this male academic also dribbles into the spunky pages of the narrative and comes to sound strikingly like that of a university Ethics Committee whom Brooks must persuade to fund her research trip to the Cap. Patriarchal forces try and get Brooks and her research to assume all kinds of vanilla positions—unlike her male researcher counterparts—but she—and her text—are beyond their control. She isn’t submissive.

And neither, she argues, should you be when you’re thinking about whatever fucking you get up to. But at the same time, she warns, too much head—too much thinking—can be a bad thing: best just to get down and dirty. Fucking Law is enlightening, kinky and arousing and, though a little more interested in philosophy than law, a moving encounter about the politics and perversions of fucking and about fucking. 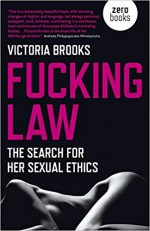