Saskia Vogel’s debut about a young woman finding closure after the loss of her father seizes you by your tenderest parts and tosses you headlong into the sea. From the first page, the ground beneath Echo, the novel’s main character, is shifting: she ‘knew the landscape would not hold’. And it is this landscape that we must navigate with her, praying that the journey will not prove as treacherous as her father’s.

This goes for every sexual experience in the novel — and there are many. Vogel’s description of Echo being fisted is some of the most beautiful prose about a sex act I have ever read (I won’t ruin it for you here). It’s in this way that she challenges our expectations: the taboo is not the sex itself, but characters’ unabashed revelling in it. You can’t help but revel in it too.

The other central protagonist is Piggy, Orly’s middle-aged housemate and ‘houseboy’, named for ‘his love of each one of a woman’s ten precious toes’. Although his story is not as arresting as Echo’s, he makes the perfect lens through which to witness the tension created by our world’s view of ‘deviance’. He has found a home with and in Orly, who is mistress of his satisfaction and his pleasure, and the first person to ever understand what it was he craved — despite his having been married. Before Orly, Piggy did not have the language to express his desires, or the right person to hear them. He is symbolic of every man and woman who has found themselves cut adrift, floundering in a society that only caters to the norm.

Permission is a novel that in turn pulls you under the surface and buoys you up. Its intensity makes it hard to press onward, in places. But, with Vogel at the helm, you are ultimately borne home. 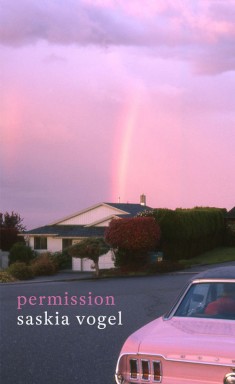