I’ll admit, there was a time when I had never really considered what I wouldn’t expect puppets to do. Reared on Thunderbirds and seaside Punch and Judy, my conscious puppet repertoire was defined by International Rescue missions and sausage-themed domestic abuse. A diverse enough spread, you’d think. But, had I thought about what I wouldn’t call ‘puppet territory’, knife throwing, striptease, and floating through the air while masturbating with an aubergine would have been high on my list. How wrong I would have been. Thank goodness the Sex and Puppets/Puppet Cabaret double bill hosted by Moving Parts, Newcastle’s new puppetry festival, was here to set me straight. 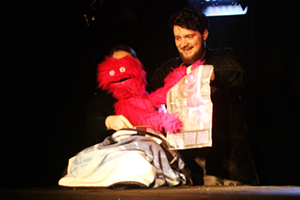 Sex and Puppets is the sex ed. that all of us needed and none of us had. Wondering Hands use verbatim stories and witty performance to talk about issues even the best of us need the occasional primer on: sexual health, sexuality, consent, and all with the help of brightly coloured monsters. Stripy sock puppets talked about everything from their chaste first kisses to their love of biting and ‘tame anal play’. Glittery STDs scuttled across the stage, regaling us with tales of how they’re transmitted, before admitting their powerlessness before modern medicine and safe sex practices. And three spangly, singing vulvas performed a barnstorming parody of Aretha Franklin’s Respect, with lyrics rewritten to promote consent and sexual self-knowledge.

But Sex and Puppets wasn’t just played for laughs. The comedy and brash musical numbers were punctuated by several more serious pieces, including a hypnotic account of sexual awakening during a childhood tennis game, performed only with two glowing balls on strings, a story of teenage BDSM initiation, and a silent, abstract routine in which a chiffon scarf navigated a mirror-world looking for its reflection. Even if, as their French-accented singing feather boas told us, ‘things get funny in the sheets’, Wondering Hands use their craft to show the confusion and vulnerability that underpins much of our early (and ongoing) sexual experience. Sex and Puppets is gorgeous, heartwarming fun that will leave you a better person – and perhaps a better lover – for watching.

Puppet Cabaret was the perfect counterpoint to a first half full of simplicity and storytelling. Headstrung’s work is intricate and awe-inspiring, forgoing dialogue for perfect visual theatre that left me wondering whether the three puppeteers were, in fact, one organism controlled by a singular mind. Dressed like burlesque undertakers in skirt suits, little top hats and opera gloves, Headstrung gave a spellbinding performance that brought new wit and creepiness to a now hackneyed cabaret revival scene. First up was the Great Throwzini, an elegant (if only semi-competent) ‘impalement artiste’ and escapologist with a series of terrified assistants and an array of knives, chains, and ropes with which he worked his magic. We were treated to an immersive performance of Life On Mars by a tiny, glittery David Bowie, and an incredible circus strongman set in which a moustachioed puppet breathed fire. Yes, real fire! But never fear, safety-conscious readers, for Puppet Cabaret also has its own firefighters: a buff trio in yellow safety hats, whose pelvic thrusts and eye-watering erections were accompanied by the prodigious use of foamy fire extinguishers, all in time to a sexy bass line.

Such complex puppetry necessarily meant long breaks between skits, which was the only downside to an otherwise faultless performance. While the puppeteers assembled their multiple props backstage, the silence was filled by an excruciating ‘time traveller’ compere, whose sci-fi schtick and pseudo-wacky jokes left me wondering whether, in some unknown laboratory behind a low-rent comedy club, Alan Partridge and Richard O’Brien had found a way to reproduce.

Nevertheless, Moving Parts’ sexy puppet double bill was a triumph, and the performers and organisers should be commended for bringing such riotous and thought-provoking theatre to Newcastle. Here’s hoping that the festival and its brilliant cheekiness will return next year. In the meantime, I would urge you all to see when Wondering Hands and Headstrung are next performing near you – you would be a fool to miss out.

Wondering Hands Theatre and Headstrung perform across the country. Click to find out more about their upcoming performances.

Why do we kiss?