January 9, 2013February 18, 2021 Editor 4974 Views
Henry Miller's Quiet Days in Clichy is one of three titles by this author published by OneWorld (Alma) Classics: Miller on the seamier side of Paris and its seedy world of cheap sex, booze and destitution. Move over, G. Orwell...

There are only two things you can do on a rainy day, as the saying goes, and the whores never wasted time playing cards.

Quiet days indeed… Henry Miller, that trickster, has played us for fools as it turns out he doesn’t spend a single day in Clichy – quietly. More likely rutting furiously in the gutter.

This autobiographical copulation (certainly can’t call it romp – too frivolous) through 1930s Paris follows writers Joey (Miller) and, his room mate, Carl (real life friend Alfred Perlès) as they drink, dance, starve and write in bohemian back-alleys, murky nightclubs and dingy flats. The second part of the book is the short story Mara-Marignan which is more of the same – adulterous wives and sad-eyed prostitutes. 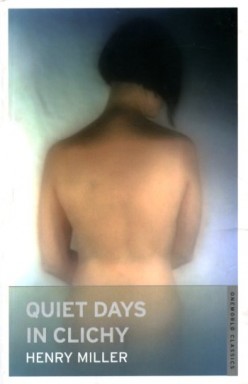 The misogyny in Miller’s books is well documented. Feminists would burn their bras if only to fling them, still flaming, in his face with the hope of causing 3rd degree burns. But is it terrible to say that this is easily forgiven when he writes with such charm and lust for life? Even as he scrounges in the bin for mouldy crusts of bread and curses the voluptuous whore to whom he gave every franc, he is so obviously filled with the joy of being alive. And between the coming like a hose pipe or shooting into guts, there are moments of real fondness and complete generosity. And I would argue a love of women, of fucking and licking and tasting them; feeling their bodies pressed against his. He revels in their sex. As he says in Mara-Marignan:

I might say, in passing, that my life seems to have been one long search for the Mara who would devour all the others and give them significant reality.