We’re off to Balham for Suburbaret, a new smorgasbord of singing, dancing and lip-syncing talent in the beating heart of Zone Three. Things are already looking up as it’s being held in the dark underbelly of an old favourite pub, The Bedford, and within minutes of arriving we’ve got pineapple and Red Leicester on sticks, “to get you into that Abigail’s Party, late 70s mood”. 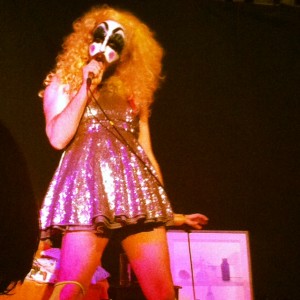 Suburbaret, as the name suggests, is cabaret in celebration of all things suburban. We meet Ms Timberlina, our bedraggled host, strumming a ukelele in a set that looks remarkably similar to the living room I’ve just vacated – an ironing board balances the spoils of the night’s quiz (£1 Waitrose borlotti beans, no less) and laundry airs prettily in the corner.

Welsh singer Emily Davis, dressed in top hat and dragon flag, belts out a poignant homage to her native Pembrokeshire, where she’s tried internet dating, oversharing and not having Channel 4 til she was twenty. Gareth Cutter continues with interpretative dance, dressed in a tiger suit, extolling the virtues of Telford: a true Baywatch babe, his suburban upbringing has seen him through ‘4 A-levels, 10 GCSEs, astigmatism’ and (his voice drops to the merest husk) ‘a Duke of Edinburgh, bronze award’.

The lights dip down to reveal a grainy projected photo showing the remains of Balham tube station, bombed during the war. Gareth Edward (who also organises the show), dressed in an old train conductor’s uniform, sings an achingly sad lament for these lost lives, complete with eerie air-raid shrieks. It’s a sombre but no less powerful moment among the cackles.

Spoken poetry comes from Michael Twaits, perched on a barstool, teacup in hand. His words – biting, fast and aggressive – speak of the misconceptions and prejudices faced specifically by the 30-something gay man. It’s gutsy and almost flinchingly authentic, and needs to be preached to those beside the (I assume) assembled liberals before him.

The audience are now well and truly lubed up: massive Suburbaret cocktails seem to have greased the wheels. It’s now the turn of Baby Lame, creeping onstage, hiding behind props. She looks like an angel, but we got wise: ruthlessly plucking hapless folk from the front row to join her onstage, she croons The Little Mermaid‘s Part Of Your World with an occasional trembling baritone before ripping her dress apart, seriously loosening her tongue and breaking a chair (“sorry, Bedford,” she mutters).

The final act, Ms Timberlina vows, will play us out of the building and she doesn’t lie. The LipSinkers are a marimba of joy: professional and hideous, perfectly timed and chaotic. Whether encapsulating the two sides of the age-old ‘shall we, shan’t we’ argument in The Ballad of Freda and Barry or barking through cardboard boxes in a rendition of the Pet Shop Boys’ Suburbia, they’re a McFlurry of acidic, artificial wonder. RuPaul’s autobiography – something of a Bible to my girlfriend – puts it nicely: “The point about pop culture is that so much of it is borrowed. There’s very little that’s brand new. Instead, creativity today is a kind of shopping process: picking up on and sampling things from the world around you, things you grew up with.”

Now, as I write this, I’m about to book tickets to see the whole thing again, on 8th March, because fun on a Sunday is important and because unpretentious fun is harder than ever to come by. I don’t get my kicks in cereal cafes or adult ball pits; I like a good show that’s not afraid to get its collective hand dirty. And I’ve been to heaps of cabaret nights, but none quite so organic as this, so unalloyed by affectation, so totally un-highfalutin. Suburbaret is muddy and vulgar, intelligent and bonkers and sexy, showcasing that underrated human necessity: the ability to laugh at ourselves. It isn’t the flashiest or most technically tight. And yet if it was, it just wouldn’t be cabaret, famed for pulling it out the bag on a shoestring, experimental, filled to the ceiling with bodies and their essential humour. Can I get an Amen in here?

REVISITING JOSEPHINE B: AN INTERVIEW WITH DEMI NOIRE