December 7, 2015February 18, 2021 Editor 6959 Views 0 Comments
The only film this year that claims to be about love that shows sex that is about love, actually. Gaspar Noé - take note!

Based on Ewan Morrison’s first novel, Swung follows David and Alice as they deal with erectile dysfunction and its causes. Areas of blame are evident; David, who has recently been made redundant is a father going through a divorce. While trying to sign up for the dole, he is distracted by a swingers site. When his new girlfriend, Alice, finds the offending page up on his laptop, she begins to research the underground world of swinging in a bid to find something that will sustain David’s hard-on.

Performances from leads (Elena Anaya and Owen McDonnell) and an appearance by Downton Abbey’s Elizabeth McGovern make for a riveting watch. Glasgow, too, plays her part with aplomb. The city’s rougher inhabitants – dressed in skin-tight leopard skin – are juxtaposed with McGovern’s glamorous American character and Anaya’s seductive Spanish accent to make a colourful cosmopolitan mix. The city shown on screen certainly makes you suspend all disbelief that Alice’s character would have no trouble in swapping sunny Barcelona for glittering Glasgow. Well, maybe not all disbelief. Where sex is concerned, Morrison’s trademark dry wit shines through to add much needed comic relief to the otherwise serious and depressing topic of impotency.

Irvine Welsh was a big fan of Morrison’s first novel and with just cause. But fans of Morrison’s work might not recognise the film from his first foray into literature. Alice is now Spanish, not American, and David is no longer ex-HR department but ex-design dept. and has no dreams of becoming an actor. These small changes streamline the story. Rather than get hung up on endless sociological factors that were explored in great detail in the novel, Morrison now writes sparingly, leaving us with just enough to make his point.

Take the novel’s Fleetwood Mac reference. In the novel, Alice calls David, ‘Oh Daddy’ the title of a chilling song about a codependent relationship. Its sad melody and despondent lyrics make it an odd  but interesting choice for Alice to use as a nickname for her new boyfriend. For the film, however, Daddy O is enough of a vaguely uncomfortable reference to let the audience know that Alice is willing to try anything to help David.

Morrision’s previous career as a television director is to thank for his talent in converting his novel for the big screen. There is an inherent difference between reading words on a page and seeing humans act out on screen. Those cloudy figures in your imagination fill in the blanks in a way that actors on film will not. The struggle in power between David and Alice that made the book convincing would have made a straight cut n’ paste screenplay too long and complex to follow. Instead, Morrison has been able to distill his message so clearly that the truth of the book comes across like crystal on screen.

First-time feature director Colin Kennedy manages to make a film about erectile dysfunction erotic.   This is quite an achievement. With every sexual encounter we wonder how far the pair will go. The suspense that this uncertainty creates an air of sexual frustration that has you rooting for the couple that at times leaves your heart in your throat. Kennedy shows the range of emotion that sex can generate, a feat rarely found in main-stream cinema. He also prevents this from being a purely ‘talking heads’ movie. Nowhere is this better shown than when David and Alice walk in on a swinging couple fucking on their kitchen counter. The wide angle of the shot coupled with its unexpected immediacy gives the scene humour. But Kennedy deftly conveys the urges provoked from glimpsing this porno-esque tableau. When our heroic couple act on their baser instincts, Kennedy swiftly replaces the humour with urgent, frenzied rutting. Over a matter of minutes we share the couple’s nervousness, scorn, amusement and eventually their arousal. Kennedy’s control of pace is nothing short of brilliant. 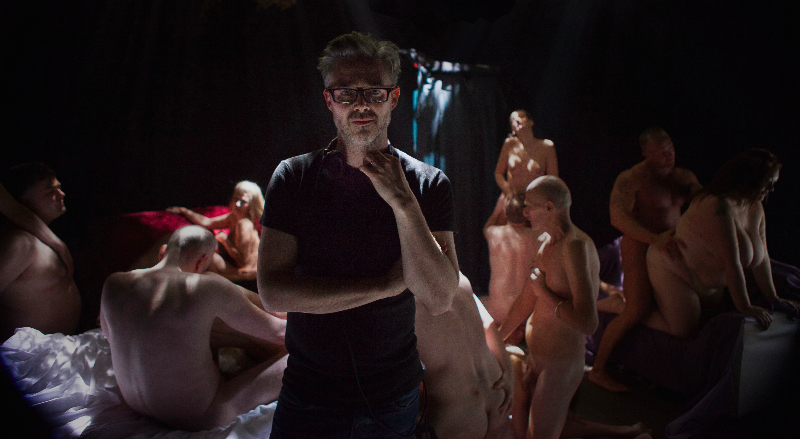 This is a gripping and moving modern day love story. It deals with the painful conflict that many couples experience when they can’t have a fulfilling sex life with the one they love. By comparison Gaspar Noé’s Love only had the pitiful issues that arise when stupid people are allowed to screw – namely unwanted pregnancy – pathetic. Swung grapples with a seemingly unending struggle: the sort that gets worse the more you try to solve it. But struggle on some couples do and Morrison’s message is that they do it for a just reason; they do it because they love each other, not just because they lust for each other. If only Noé had read his Morrison.

Rhetoric in the Bedroom