There should always be room for books which introduce us to different cultures and the backwaters or extremities of history. On occasion it may be that they can be fiction, although in general it must be asked why a documentary account would not serve understanding better, if only on the grounds that truth really is stranger than fiction.

I have always been puzzled that the Holocaust is a source of fiction. There are still enough survivors, recordings and film to ensure a constant witness. I grew up with a military relative who had personally participated in the concentration camp liberation of Buchenwald. At a young age I watched that amazing Jeremy Isaacs series World at War and saw therein the appalling consequences of Nazi genocide; although my son reminded me that, for his generation, Schindler’s List was salutary. Nonetheless I find little merit in fictional histories of any sort, let alone this one. This not least when despite the dreadful scale of what was done, there are many other terrible (possibly less well recorded and certainly less memorialised) narratives of man’s inhumanity to man deserving of reminder. But humans love stories, so the story-teller will reach into the goody bag of themes he or she knows will strike a chord. Love lost and found, children dead or estranged, loneliness and so forth: essentially the fundamentals of the human condition to be rehearsed and re-cast.

Robert Hillman has put the kit together, including a bookshop as his deus ex machina. Our hero is a lonely Aussie farmer abandoned by his wife, his son gone with the mother. Our heroine a Jewish death camp survivor bereft of her own child. Since Australia is home to, and sought after, by many escapees from conflicted countries (not least the Balkans) I wondered why the setting was the late 1960s. The possible explanation is that it allows Hannah – the female lead – to be a ‘survivor’ and therefore to take a (qualified) licensed stand against Australia’s support for the USA in the Vietnam war: except any migrant or ‘non-Aussie’ could have done that – and, as it happens, so could an aboriginal Australian, but this would probably be less acceptable to Australian readers. In truth, the issue lacked centrality to the storyline so I wondered how much it too was simply an ingredient thrown in to persuade the Australian Film Board to support a movie. Come on people! Some really good films have come out of Australia.

Is this a wonderful book? Goodreads subscribers seem to think so and its reader reviews endorse the verdict. The inside cover quotes flag the recipe: ‘beautiful prose’, ‘vivid (real) characters’. Who am I to argue? The author is an award winning writer. Should you read it? Possibly – if you have an appetite for sentiment and feel that introducing a Holocaust survivor will add significance and meaning to the narrative.

Otherwise, it is a nicely executed comfort read of love lost and won involving two decent folks in a rural Australian setting. 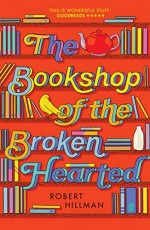 Robert Hillman, The Bookshop of the Broken Hearted, Faber & Faber