The concept of ‘the male gaze’ has become a powerful signifier in the feminist struggle for parity of esteem.  It is more than a description of masculine carnality – rather a crucial component of the taxonomy that divides the human species into male and female. It is a conundrum and issue that is unlikely to be resolved easily for many reasons. One of these is to do with the difficulty (for men at least) of identifying ‘the female gaze’.

Aside from recognising that women often lust after men and play skilful football or head police forces, the reality is, (generalisation alert) that men remain a little baffled about the female gaze. We have the sense that it is something more secretive and complex than men’s. Paintings such as Velasquez’ Rokeby Venus  or Monet’s Le déjeuner sur l’herbe capture the male apprehension that women’s gaze is often inward and reflective and when outward, directed beyond the roles and situations assigned to them by men.

To this reviewer Anne Serre’s novella could only have been written by a woman; and only a French woman could have penned the elegant reverie which to a mere male gets one as close to the female mind and psyche as may be possible.

(my heart is drowned
In the slow sound
Languorous and long).

Since these were the broadcast announcement of D-Day and the summons to the French Resistance there is added resonance in their fit with the narrative’s underlying sense of menace, subjection and almost joyous rebellion.

The intriguing setting is a country house. The governesses have charge of a group of small boys. If it is indeed a school, it bears a remarkable resemblance to my prep school – including its owners and overlords – who echoed the eccentric couple of the book (M. et Mme. Austeur) and managed their establishment with a mix of carelessness (we roamed the extensive estate full of natural hazards unfettered) and brutality – beaten with a leather strap on the bare buttocks for infringement of the ‘no talking’ rules).

Serre’s governesses are, however, grown women of sexual experience. Unlike my Matron, they undress for the small boys and allow the older ones to touch them – on a breast or a thigh, but never more intimately. They offer brief and explicitly vulgar playlets to the old gentleman in a neighbouring house to view through his telescope. And yet they are still trapped in a seemingly dreamlike state of adolescence. They have agency and a sense of self; they move in and out of the controlled world of their role, but they are not free. In this, they remind one of Lewis Carroll’s Alice. It seems to me, and I advance this in all humility, that Carroll had a rare understanding of the female imagination and Alice’s adventures reflected women’s journey into the adult world: one full of strange creatures, uncertainties and puzzles and above all the constant requirement to assert identity in the face of other people’s perceptions and demands.

But the eroticism of the story is less in specific episodes than in the atmospheric present tense narrative which inhabits the imagination as visually as a film. Serre’s prose (beautifully translated by Mark Hutchinson) has the sensual texture of the film Picnic at Hanging Rock, D.M.Thomas’s The White Hotel and Paul Bowles The Sheltering Sky. From scene to scene it is light and dark, humorous and intense; yet always both fluid and precise. And so we return to Alice and Lewis Carroll’s terminal poem in Through the Looking Glass (and by coincidence from that book’s title recalling The Rokeby Venus).

‘Ever drifting down the stream
Lingering in the golden gleam
Life, what is it but a dream?

As men, we may not ever fully understand women and their dreams. Nor perhaps should we wish to, for they are not necessarily comfortable, but in Serre’s Governesses we can come to appreciate and love them better through seeing with their eyes rather than our own. 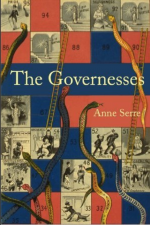 A Right Too Far