There is a huge amount to admire in the exquisitely designed and printed The Purple Book, and what little there is not to like really depends on the vicissitudes of a reader’s personal taste. What might easily have been an exercise in ‘preciousness’ turns out to be a robust examination of a sometimes notoriously fey and whimsical – yet brilliant – period in literature, art and illustration: the Decadent, Symbolist and Surrealist movements.

But this is almost a bonus, a side benefit, as it were, from what is mostly a survey of five important contemporary illustrators as they interpret the works of an equal number of authors of fantastic and dreamlike literature, from the Romantic, Edgar Allan Poe’s Eleonora of 1842 to George Bataille’s L’histoire de l’oeil of 1928.

Each artist (Laura Laine, Vania Zouravliov, Jules Julien, Andrzej Klimowski and Martine Johanna) is interviewed and some of the observations they make about their work are both insightful and revealing – again, a bonus. And if that were not enough, the book’s theme, the relationship between illustration and the written word, or in other words, the illustrator’s craft of the visual interpretation of literature, is handsomely demonstrated by a further 22 artists from different parts of the world. The Purple Book’s composition is like that of a beautiful layer cake, or reminiscent of the folded, compressed strata found sometimes in the cliffs of Cornwall’s north coast. Each seam is repeated and this pattern becomes increasingly satisfying and fulfilling to the reader.

As well as old favourites such as Vania Zouravliov, who has illustrated for both  ER and ER Books, and whose work is well represented here, there were new discoveries for me, such as Tran Nguyen, Yuko Shimizu, Dan Hillier and Sam Wolfe Connelly. Normally I shy away from the word ‘gorgeous’ but here is a book that is indeed worthy of that over-used and much-abused adjective. With productions in print like this there’s far more optimism that bookshops will survive the e-book publishing onslaught. Let’s also hope that, as with its historical inspiration The Yellow Book, this Purple Book is only the first of a long series. Its authors, Angus Hyland and Angharad Lewis, deserve to be congratulated. 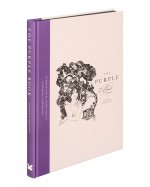 You can see some of the images in this book in our gallery feature HERE.

Another postcard from beyond