I first encountered Émile Zola’s anti-love story Thérèse Raquin, by that giant of nineteenth century French literature who gave us J’accuse, some time in the winter of 2006 while recovering from my first genuine French love affair. Consoling myself with incomprehensible continental philosophers and copious quantities of vin rouge, I happily embarked on a new liaison, of the literary kind. Ensconced in a student garret above an old pub, the walls of which threatened to collapse under that winter’s relentless rain, I sat spellbound by Thérèse and the fate of the Raquin family down the gloomy Passage du Pont-Neuf in Paris. I decided to revisit the book (recently the subject of an excellent musical stage adaptation by Noona Shepherd) and fell out of love all over again.

Like the hallucinations that plague the murderous protagonists at the story’s end, Thérèse left an imprint on my mind that haunted me. Vague shadows of the Paris morgue, a painting of a drowned man and the outline of a deeply unhappy woman all merged as the narrative morphed and shifted in my memory. Someone died, but who? Combining gothic horror with gritty realism, Zola creates a ghostly and disenfranchised setting in this suffocating psychological drama. The Raquin haberdashery is hidden in a passage lined with ‘gloom laden shops… restless with fantastical shapes’. This Paris is a world away from the bright lights and sumptuous arcades of modernity; these characters are on the periphery, hovering around the lower echelons of Parisian society.

The product of her French father’s relationship with an Algerian woman who died at birth, Thérèse is deposited with a kindly, if misguided, aunt, Madame Raquin. She brings the girl up alongside her beloved son, sickly, spoilt Camille. The children are married, an incestuous pairing that pleases Madame, but for which she will pay a heavy price. They move to Paris where Camille pursues a career as a clerk, a proud ‘cog in the wheel’ and Madame purchases the haberdashery, the monotony of life punctuated only by a weekly game of dominoes with their dull petit-bourgeois friends. Locked in a loveless marriage and indebted to her aunt ‘her entire will braced to make a passive instrument of her being, supremely compliant and self-denying’ Thérèse withers away mutely, in a permanent reverie. In this story of interior worlds and hidden desires, her inner passions are only unleashed at the arrival of wannabe artist Laurent, a square shouldered freeloader who gets more than he bargained for in the comforts of the family home.

In the nineteenth century unfulfilled female desire and thwarted ambition materialised in the amorphous symptoms of hysteria and nymphomania, the subject of serious clinical investigations at Paris’s Salpêtrière clinic in the late 1800s. The use of hypnosis to bring forth the unconscious minds of patients, subject to hallucinations, phantom illnesses and trances like those experienced by Thérèse, would form the basis of Freud’s early work on hysteria, and lead his colleague Breuer to declare ‘the majority of severe neuroses in women have their origin in the marriage bed’. Indeed, sexual agency engenders a physical and intellectual awakening in Thérèse. Brazen in her desire for Laurent, she delights in taking risks, overwhelming him with her passion. Once the couple are free of Camille an enforced separation ensues, Thérèse begins to read books, and in a nod to her underlying state of depression, contemplates the grey wall outside her window with joy. The pretence of life as the dutiful daughter must be maintained for Madame as Thérèse awaits her lover, and the tedious domino games ‘this bourgeois happiness, the smiling dreariness’ recommence. But in committing the ultimate crime to be free, the lovers pay with the price with their desire, and eventual emotional disintegration.

Thérèse has parallels with Flaubert’s Madame Bovary, the anti-heroine suffocated by her sex: lonely, rebellious and finally mad. Beautiful and unfulfilled Emma epitomizes bourgeois boredom and breakdown, while Thérèse is permeated with sex, death and fears of racial degeneration. Highlighting the hollow social position of women and the boredom that blights an unfulfilling intellectual life, both stories are tinged with misanthropy that precursors existentialism.

A sensation when it was published in 1867, with its central themes of infidelity, matricide, madness and rampant female desire, Thérèse was trashed by critics as immoral. Le Figaro derided it as ‘a pool of blood and mud’, likening it to Courbet’s explicit and controversial painting ‘The Origin of the World’. In a rebuff to his male critics in the preface to the 2nd edition, Zola echoes the attitude of male psychologists to their hysteric patients, describing Thérèse as a clinical analysis of his subjects, such ‘as surgeons perform on corpses’. Adopting a quasi-scientific approach to his art, Zola poses as an unlikely scientist, dispassionately presenting his subjects for consideration by an educated audience. This is art for the greater good. Not sordid at all!

Despite the authors’ protests, Thérèse illuminates a shift in morality and attempts by the male establishment to better understand the position of women in society. Perhaps this is why it continues to captivate audiences over 150 years later. 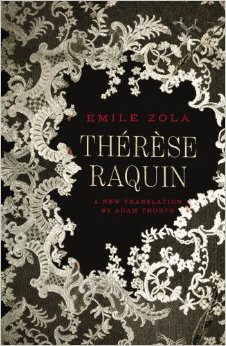