As a mere male (albeit white, older and middle class) I am one who regards the female of our species as my co-equal partner in the business of living a human life and, hopefully, I behave that way.  I claim no virtue in this, but sadly both current global news reports and simple social observation in my own milieu remind me that gender and the sexual impulse continue to drive inequity and iniquity in every society.

Peakman is clearly a serious feminist and without undue polemic, she lays out the case for the prosecution. An experienced author of sexual histories she has chosen empire as her context for this narrative. Among the protagonists, Spain in its conquest of what is now thought of as Latin America, was the most brutal: its massacres and rapes unmitigated by any sense of mercy.  For the rest of the Americas the French and British acquired their territories more stealthily through settlement and trade rather than force of arms. This meant that friendly relations with the indigenous people – including sexual engagement – were a more productive way to interact.  Although these early incursions were far from perfect, the real brutalities to non-white men and women came with American Independence, mass settlement across the West and the slave trade.

We are left in no doubt that religion carries a great, maybe even primary responsibility for the abuses suffered by women. The Europeans carried with them burdens of guilt about sex as sinful (except for procreation) and women were seen as intrinsically the instruments of Satan.

Further East, in Islam, Hinduism and even Confucian thinking, elements of these ideas – women as sources of temptation and error as well as pleasure – led to them being closely guarded  possessions. In contexts outside marriage or the harem and its oriental equivalents, their status depended on how well they satisfied male desires. Acquisition of the right skills was often educated into girls as a means of social advancement. But whether courtesans or street prostitutes, females were commodities at almost every level of society.

To a great degree, and especially in advanced societies such as India, China or Japan, the impact of European empire building was more or less absorbed into the prevailing social systems and sexual customs. In the Pacific it is interesting to reflect that the Polynesians were very relaxed about sex to the benefit of passing sailors and explorers. Sadly, this openness was rewarded with the scourge of western diseases.

Peakman’s work is wonderfully rich in historical detail and cultural insight. It is an informative, accessible read. For its virtues it is fair to call it enjoyable, though as a corrective to the romantic male gaze view of history, it’s a bit of a horror story. 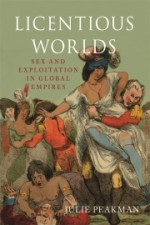 How to avoid a St Valentine’s Day Massacre

POSTCARDS FROM THE EDGE NO.8