Uncategorised
June 21, 2014May 28, 2020 Editor 2193 Views 0 Comments
"Wits are treated just like common whores: first they’re enjoyed, and then kicked out of doors"; would Rochester have seen through Russell's brand of wit?

John Wilmot, 2nd Earl of Rochester, is often thought to be the quintessential Restoration man, in terms of his debauched lifestyle and squandered brilliance. When he began one of his most famous poems, A Ramble In St James’s Park, with the statement that
‘Much wine had passed, with grave discourse
Of who fucks who, and who does worse’,
his aristocratic readers, recognising themselves as those who participated in such ‘grave discourse’, would have sniggered and enjoyed the allusion.

The era in which he lived, full of strong wine, stronger opinions and whores aplenty, seems impossibly distant now – light years from today’s age of milksop political correctness. It’s tempting to speculate, were Rochester to be catapulted three and a half centuries into the future, how he would fare in the London of 2014 and  how he would communicate through novel media with an unfamiliar audience.

For starters, he wouldn’t be a poet. Since the death of Seamus Heaney, poetry has become an endangered species, a tribe that bears about as much relation to the witty, debonair court circle that Rochester was a part of as tripe does to fillet steak. His discursive, often biting satires on his fellow man would have to take another form. I can’t see Rochester as a blogger or a prolific tweeter, either; perhaps he would be a troublemaking and iconoclastic polemicist for magazines or newspapers in the Christopher Hitchens mould, but I like the idea of him more as a renegade broadcaster, popping up on the radio and TV to cause mischief and discord, and then vanishing before anyone can work out what’s happened. That fifth spot on the Question Time panel would be filled with unpredictability and excitement every time he appeared. Each time he opened his mouth it would be enough to furrow the famous Dimbleby brow.

Would he be like a more intelligent and gifted Russell Brand? He certainly would have seen through this poseur, who has openly styled himself on Rochester.

“And wit was his vain, frivolous pretence
of pleasing others at his own expense…
For wits are treated just like common whores,
First they’re enjoy’d, and then kick’d out of doors:
The pleasure past, a threatening doubt remains,
That frights th’enjoyer with succeeding pains.
Women, and men of wit, are dangerous tools,
And ever fatal to admiring fools.”

On the one hand, both men share an open-minded (and open-zippered) approach to sexual liaisons, and it’s impossible to think that Rochester would not have taken full advantage of the many apps that allow for free and easy carnal congress. Given his proclivity for enjoying both sexes, it’s easy to see him as an enthusiastic user of Tinder and Grindr in equal measure, probably with a profile summary along the lines of ‘Ladies, an announcement. I am up for it. All the time. Gentlemen, do not despair. I am up for that as well.’

Yet it is hard to think of Rochester as being as transparently cynical as Brand. A man who had a hard-nosed disdain for the world as he saw it, he also clung onto the belief that there was something else beyond, a better and less tangible existence where what we regard as sinful and ‘dirty’ is not only forgiven but made flesh.

Brand’s only aperçu has been to advise people not to vote on the grounds that all politicians are liars and charlatans. Rochester – who openly loathed the corruption and venality of politicians and clergymen – might have agreed with him, but he remained a man who favoured action over passive acceptance. Either way, it seems unlikely that he would be accepting any invitations to 10 Downing Street to hobnob with Dave and George and appearing in a photo op to show his role in some hastily cobbled together taskforce – unless it was to go out and rescue fallen women.

Ah yes, Rochester and prostitutes. He boasted in one poem that he had
swived more whores, more ways than Sodom’s walls
e’er knew…
and it is likely that he would rub his hands together at the first sight of a poorly blu-tacked card in some dingy phone box offering dubious services in doubtful taste. A man who was never shy about embracing the demi-monde in all its seamy disreputability, Rochester wouldn’t balk at the spectacle of some over-the-hill and bewigged madam plying her trade with all the passionate abandon of the speaking clock. And yet it seems equally unlikely that Rochester would be interested in pursuing the sort of high-class hookers who rest their tanned derrières on the barstools of Park Lane’s grand hotels, offering an evening of banal conversation but exotic sexual abandon for a middling four-figure sum. Never a man who was much good with money, Rochester would probably have charmed them into providing their services gratis.

And if one of these platinum-haired lovelies were part of a tabloid entrapment, it is unlikely that a man as canny as Rochester would ever be stung, or care much if he was. One would look in vain for an empty statement of remorse the day after, or a weaselly family group hastily assembled for the mandatory photo call. More likely he would mutter something along the lines of the famous end to his poem Upon Drinking A Bowl:

‘Cupid and Bacchus my saints are
May love and drink still reign
With wine I wash away my cares
And then to cunt again.’

But whether Rochester would find himself in a world where love and drink were still venerated or in an increasingly priggish and moralistic society, is not really the issue. His greatest commitment was to all things free. Free thought, free expression and free love. And doubtless, should he be able to obtain intoxicating substances for free too, he would be a happy man.

Walking amongst us today, Rochester would be both amused and bemused by how little human nature has changed, and how the hypocrisies and bestial needs of which he wrote so brilliantly remain exactly the same. I would welcome his visit to the present, where his antics would first attract publicity, then opprobrium, and I would be all too eager to read the Daily Mail’s ensuing vitriolic reportage.

Alexander Larman writes about literature and books for a variety of publications including the Daily Telegraph, Observer and New Statesman. His first book, Blazing Star, a biography of Lord Rochester, is published by Head of Zeus. 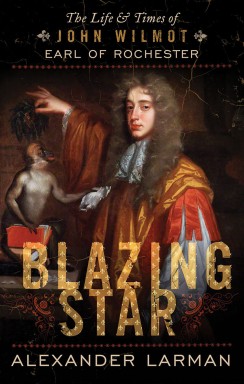