Uncategorised
October 25, 2012May 29, 2020 Editorial Assistant 1118 Views
Tricity Vogue goes under the covers to find out how polyamorists share their love around.

I used to think having sex with more than one person at a time was just bad behaviour. Not that this stopped me doing it. But the good news is that it’s possible to be a slut and have morals at the same time. There’s a whole movement dedicated to the belief that you can have more than one significant other without being a cheat, that ‘sex is nice and pleasure is good for you’, that satisfying your desires is not a sin, and that it can even make you a better person.

The movement is called polyamory, meaning ‘loving more than one’. It started in San Francisco in the sixties thanks to pioneers such as sex-positive guru Dossie Easton, co-author of polyamorist bible The Ethical Slut: A Practical Guide to Polyamory, Open Relationships, and Other Adventures.  Happily, it’s still alive and well, flourishing in the rain-soaked British Isles as well as on the sun-soaked Californian coast.

Having your cake and eating it?

Mae West famously said “too much of a good thing is wonderful”. Polyamorous relationships are uncategorisable by their very nature, coming in an infinite variety of combinations, but the one thing they all have in common is that they’re not monogamous. This doesn’t mean that polyamorists are all commitment-phobes. Quite the reverse, in fact. In the ‘Frequently Asked Questions’ section of alt.polyamory, serial monogamy is referred to as ‘trading people in and out like baseball cards,’ whereas polyamory means ‘not refusing commitments because something better might come loping down the path’: in other words, more commitment rather than less, because you’re committed to more than one relationship. 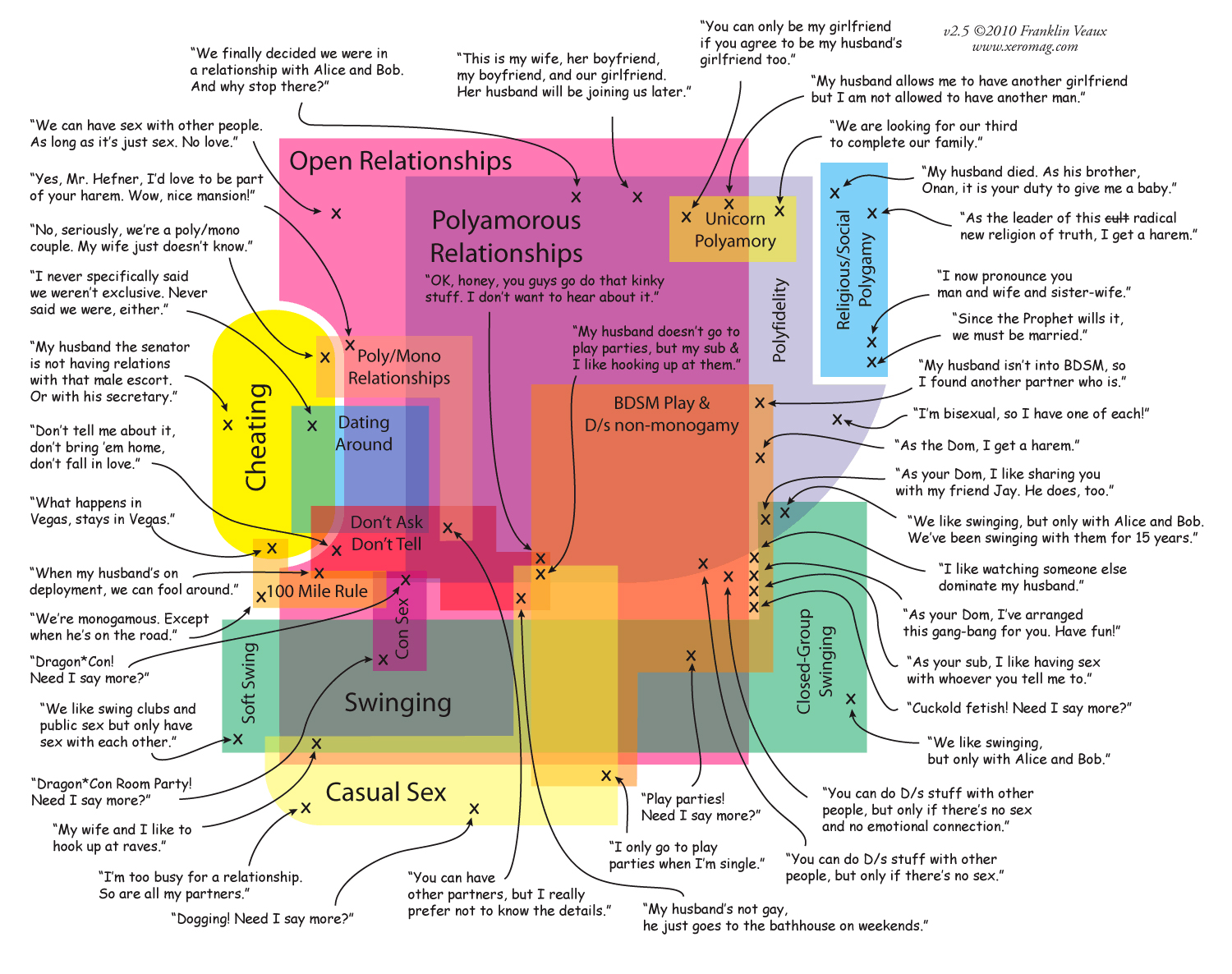 Does that work in practice? Is it a utopian ideal, or a nightmare-in-the-making? I’ve seen Jules et Jim, I know that three-way relationships can result in at least one party driving themselves off a cliff. At least they can if you’re French. Reading the polyamorist manifesto was one thing, but to get an idea of what happens in the real world (i.e. the rain-soaked British Isles), I decided to talk to some real people. Polly and Amy are partners, but they each have another girlfriend, as well as several lovers. They’ve both been polyamorous for about two years. Richard Evans-Lacey is a sexual healer and co-founder of The Love Cult with his female partner Max. He’s also an established psychotherapist with a practice in Bethnal Green.

Amy told me one of the most galling misconceptions she’s encountered from friends and acquaintances: that it won’t matter if she gets dumped, because she’s got a spare. She points out that having two girlfriends also means you can get dumped twice in one day. Many polyamorous, or ‘poly’, people contend that they’re more romantic than monogamists, not less. “It’s not like sharing a cake,” says Amy, “it’s like having more than one child. Your love expands.”

For Polly, it’s about identity and independence. She hates the idea that in a monogamous relationship a bit of you belongs to the other person. She doesn’t want anyone else to have rights over her. Polly knows about monogamy; she was married to a man for ten years before discovering women and polyamory in one go. Even though she suffers far more from jealousy and insecurity in her multiple relationships with women than she ever did in her marriage to a man, she believes that’s a good thing, “Polyamoury is more appealing because you get to know people more thoroughly. You can’t avoid things as easily, you have to deal with them. And that’s revealing about yourself, and why you think the things you do.”

Richard always found it difficult to be monogamous. His pattern for many years was to try and find someone who was perfect, in the hope that this would stop him wanting to wander. He would oscillate between being a tart, free but lonely, and finding companionship but feeling trapped. Neither state was satisfactory. What he really wanted was someone he could be with – a really good friend – so that together they could have sex with other people. His current partner told him it was okay for him to date other girls, but he still felt trapped and resentful. “Surprisingly, the freeing thing for me is for her to go off with other people. It makes her feel more attractive to me, because other people want her, and I’m happier with her.”

Does Your Mother Know?

Coming out as a polyamorist is not unlike coming out as gay. In some ways, poly people are even more marginalised in society, since civil partnerships can only be made between two people, and you can only have one legal next-of-kin. Social systems are set up for singles or couples, and polyamory is outside most people’s frame of reference.  “Office parties and weddings are difficult,” says Polly. “You get an invitation for you plus one, so you either have to get back to them and say, ‘Can I have a plus two?’ or go on your own.”

Amy decided to introduce her mother to both her girlfriends at once. Both Polly and Amy’s other partners were terrified. Amy’s mother was bemused, but mostly glad that all three of them seemed to be happy. She smiled sweetly, asked both girlfriends what they did, then they all went shopping. Polly hasn’t told her own mother yet, partly because she has a closer relationship with her and speaks to her every day, which makes it harder. She has told her sister: “It was hilarious. She said, ‘I know, I’ve been stalking you on facebook.’”

Polly explains that although she doesn’t know anyone whose parents have reacted badly, some friends are less accepting, often out of concern: “they’re worried about your welfare – they think you must be being taken for a ride.” Monogamous friends can be frightened by a more flexible alternative to their own relationship model, particularly those who are married with children, who only have one choice: divorce or stay together for life. Some friends’ partners feel threatened: “You’re going out with that polyamourist, she’s gonna brainwash you into sleeping with her.”

Polly tells me about the time her other partner was trying to explain her love life to her father, who’s a vicar: “I suppose Polly is my girlfriend, and Adam is my boyfriend.” “Oh, that’s all very modern,” replied her father, “you’ve got one of each.”

Is polyamory really very modern, though? This morning, coincidentally, I finished reading a novel by Colette, Claudine en Ménage, written in 1902, which tells the story of the 20-year-old heroine’s ménage a trois with her 45-year-old husband and her female lover. Claudine’s indulgent husband sets her up with a shag pad she can take her lady friend to, and then moves in on Claudine’s lover himself. Our feisty young heroine catches them at it and flounces off to her father’s country house, where she sulks a bit before realising that the problems between her and her husband are nothing to do with the other woman and everything to do with bad communication between them; basically, the archetypal polyamorous ethos that sexual experimentation can only work alongside openness and honesty. Ah, but that’s fiction, you say. One look at the author’s own life will reassure you that, if anything, she was even more of an unapologetic polyamorist in life than she was in art.

100-year-old polyamory may seem impressive, but the recently published book Sex At Dawn goes even further back. A lot further back. It turns out prehistoric man lived in egalitarian groups that shared food, child care, and, yes, sexual partners. So polyamory came before monogamy, which is, in fact, the Johnny-come-lately of sexual mores, not the original model after all (sorry, Adam and Eve).

Jealousy is the elephant in the corner of every polyamorous relationship. At least it would be the elephant in the corner if polyamorists behaved like most people and avoided talking about the aspects of their relationships that discomfited them. But poly people are unafraid of tackling their relationship insecurities head on. Or rather, they might be afraid, but they do it anyway. Some poly people don’t have a problem with jealousy, while others have to work at it – but there are a whole host of community support structures in place to help them, including conferences and away weekends such as OpenCon. Amy explains the poly line on jealousy by quoting Dossie Easton, ‘the goddess of polyamory’, at a relationship workshop: “Treat jealousy like flu. Eat ice cream, wrap yourself up in a blanket, try and work out how you got it. Then work out how to make yourself stronger so you don’t catch it again.”

Polyamorist ‘London Faerie’ says “a key thing for me about poly is the way it enables us to grow emotionally and become more conscious. For example dealing with jealousy helps many people to learn what is underneath these feelings (‘not good enough’, feeling left out etc). Through this journey we often become stronger, get to know ourselves better and become more emotionally adept in a host of different situations – not just our love relationships but also work, with children and so on.”

Making up your own rules

The poly scene has co-opted a word for the obverse of jealousy – ‘compersion’. It means feeling happy that your lover is happy doing something without you. For example, you might be sitting in watching TV, feeling glad that your lover is out on a date with someone else, especially if they’ve been a bit down lately, and being asked out has cheered them up. It’s not a word with an exclusively polyamorous meaning, as it can also apply to parents enjoying their children’s happiness, but it’s a concept that poly people find very useful to counteract the negativity of jealousy. But then, they’re a pretty positive bunch all round.

After reading and talking about polyamory, I’ve come away with the impression of a group of people who are thoughtful, fair-minded, diplomatic, and, most of all, honest. Not all their relationships work out, but they think it’s worthwhile to keep trying, because they believe in what they’re doing. Polyamorists are pioneers, explorers. And whether or not we follow them down the path they’re taking, the things they’re finding out at the coalface of relationship experimentation can be applied to all bonds, whether sexual or not. After all, if you believe, as polyamorists do, that intimate relationships are equally valid whether or not they include sex, then more or less all of us are polyamorous in one sense. Anyone who’s got a close friend who knows them inside out, and who they’d drop anything for, has already got a relationship just as important as the one with the person they happen to have sex with. That’s if you look at it from outside the monogamous romantic model that most of us have accepted from childhood.

Living outside of monogamy, whether in an open relationship or a full-on polyamorous concatenation, is neither better nor worse than choosing to be faithful to one partner. As far as the people I spoke to are concerned, it’s just what works for them best right now, and they don’t judge anyone else’s choices – not even those of the people they love. Especially not those of the people they love. I’ve come a long way from thinking that having sex with lots of people is a form of bad behaviour – if you’re going to do it properly, you need integrity. And the one thing that strikes me about the poly people I’ve talked to is that I’d feel very safe getting into bed with any of them.

Feature image above: CC courtesy of theslowlane on Flickr.

How to avoid a St Valentine’s Day Massacre

An Interview with Jodi Ellen Malpas