Uncategorised
October 2, 2015May 28, 2020 Editor 1226 Views 0 Comments
Where a genital close-up and a self-performed abortion fail to shock, something much gentler delivers the sucker punch

Stephen Fingleton passes on the offer of coffee, thanks. He’s got an hour – before he’s goes off to a meeting round the corner in Soho – to impart his wisdom about sex, evolutionary psychology and film. More history professor than film director in appearance, he looks at me as though I’ve handed in a mildly disappointing essay. I get the feeling I’m about to be schooled. His towering frame sports a tweed jacket and an unexpected cravat. A bushy beard camouflages his youth of 32 years. The combination creates an academic’s air of chaotic brilliance. He removes his glasses to expose the full power of his hypnotic stare… repeat after me: ‘You will go and see The Survivalist’. 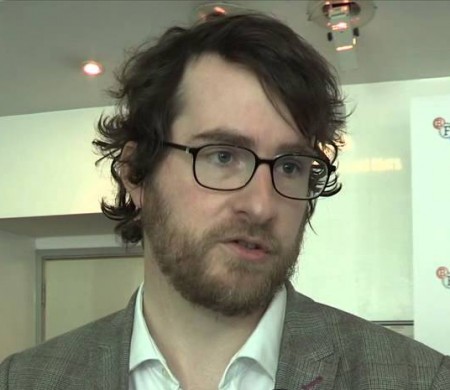 Sex is central to The Survivalist. Set in a fossil-fuel-free and verdant future, humanity is struggling to survive. The nameless protagonist (played by Martin McCann) lives in isolation and under threat from violent scavenging groups. A mother and daughter (Olwen Fouere and Mia Goth) happen across his smallholding and barter for food and protection. Refusing potentially bountiful seed, he accepts the daughter as fair exchange. The film follows the consequence of man’s need for physical intimacy even in desperate times. Beautiful cinematography, voyeuristic camera angles and lack of instrumental soundtrack draw you into the post-apocalyptic woods, holding you until the bitter end.

Fingleton has been wrestling with a problem this morning. The audio description writer for the film questioned his interpretation of what happens in it. He thinks it’s the director, or the scriptwriter (for this film, he’s both) who should pen the text of what’s happening in the film. He’s just got off a two-hour phone-call revising the revisions sent to him.
“They told me I was reading too much into the film!” he cries in his gruff, Northern Irish accent.

So I ask: could he be reading too much into it?

“I’m the fucking author! It’s a film you expect the audience to interpret. Otherwise they should just go home.”

Indeed, The Survivalist is a philosophy student’s dream. By stripping away all social constructions, Fingleton creates an environment where relationships can develop in a state of nature (it’s an anthropologist’s dream, too). Here the question that most concerned him was: in times of great calamity, what kind of relationships evolve between the sexes?

He uses the fall of Berlin to illustrate his theory. The conquering Soviet forces inflicted massive sexual violence upon the female population; soon after, women started to trade sex for food and issues of morality were ignored. The imperative was survival. The societal tabula rasa created by disaster revealed the differences in strength and power between men and women. In times of crisis, the real bargaining power women have is sex. His reductionist outlook was shocking, but not for the reasons he thought, “It’s not the fact that the transaction is made, it’s that it’s done so dispassionately. The women have obviously done it before. People would feel better if there was a scene where the girl has to weigh up the decision.”

Portraying women as calculating in the deployment of their sexuality is part of the film’s fascination. Fingleton takes it further than just times of crisis when he says that he is parodying modern relationships. As the cost of living in London rises, the gender pay gap remains unchanged but the gender ratio remains the same. One is lead to question the basis for the majority of relationships in the capital. How many women remain in satisfactory relationships because of their swanky postcode? How many women remain in abusive relationships because the cost of leaving is just too high?

However, while the power balance is skewed, it is not necessarily unequal, as Fingleton reveals when the trade of sex for shelter and food is agreeable both to the survivalist and to the women. The story was partly influenced by the ever-present rumours in the film industry of mothers sending their actress-wannabe daughters to the right producers. Sex will get them the right screen part. And here words like ‘victim’ and ‘exploitation’ start to be bandied around. But Fingleton never portrays the girl as helpless. Sex is a weapon for survival in the jungle, whether real or the Tinseltown variety.

For him, femininity is a powerful tool capable of great change. He tells me about a potential ending to a scene that, regretfully, he decided not to use: when a neighbouring scavenger kidnaps Goth’s character, he takes her into a field and forces himself on her. Parts of this attempted rape were improvised by the actors involved. During one improvisation, Goth begins to stroke the beard of the attacker to calm him down. She manages to buy herself enough time to be rescued before the unwanted act. Maybe it was for the best that this was left out; its inclusion could have been heavy-handed.

Even with Fingleton’s cool rationalisation of human behaviours, he doesn’t deny the existence of love. I ask if he resents its presence in the movie. He doesn’t, “Despite it’s beginning as a transactional relationship, it gains meaning.” Indeed, love worthy of self-sacrifice blossoms.

My coffee is finished and so is the tutorial. My professor only has a few minutes before his next appointment.

What’s next on the slate for Stephen Fingleton? An adaptation of Venus in Furs? Lysistrata? “I want the next Fifty Shades of Grey. I’m there. But my agents don’t take me seriously.”

Somehow, one finds that difficult to believe.