Uncategorised
September 25, 2015May 28, 2020 Editor 2401 Views 0 Comments
The cult-cabaret diva Ursula Martinez gives us an exclusive interview ahead of her Birmingham tour

Zoë Apostolides: Tell us how it all started. What are you trying to achieve? Were early audiences receptive?

Ursula Martinez: In a way, my new show, Free Admission, is a simple response to a lot of the feedback that I got from my last show My Stories, Your Emails. A lot of people commented on how much they had enjoyed my autobiographical stories and felt they could have heard more. And so that is what I decided to do. Although my stories and observations are quite personal, I tackle a range of meaty subjects that resonate with a wider audience, including religion, the Internet, gender inequality, war, racism… as well as the cleanliness (or lack thereof) of my bum-hole! I premiered the show this summer at The SouthBank in London and got an overwhelmingly positive response from audiences.

ZA: You had a big reaction to the online video posted of Hanky Panky. Looking back now, and given the show that was born from it, do you think you managed to transform what many would consider a negative into a positive experience?

UM: Yes, definitely. The posting of my Hanky Panky video online elicited a massive response. Most of the responses were perfectly harmless and fun. However many of them felt, at best, inappropriate and delusional, and, at worst, threatening and offensive. I felt that I lost control of my work and my body. By making the show My Stories, Your Emails I felt like I regained control.

ZA: Why do you think we’ve seen such a rise in cabaret’s popularity in recent years? 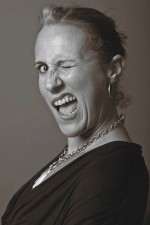 UM: It might just be that fashions and trends always come around again. It may also be that we receive so much ‘mediated’ entertainment, particularly now with the Internet as well as film and television, that we are drawn to the live, immediate and visceral nature of cabaret.

ZA: Tell us about Free Admission. What motivates you? In this latest piece, you seemed to have departed slightly from the literal “baring all” of your previous work. Do you think audiences respond to wider political/social observations when they’re being titillated? How have reactions varied across your style or performance?

UM: Rather than titillation, I think I use humour to introduce social/political observation. Also, who said that I have departed from the literal ‘baring all’? Come and see the show!

ZA: Do you consider your upbringing in Croydon an influence on your work?

UM: I like the fact that I grew up somewhere so very ‘unremarkable’. I think it has given me a groundedness that does reflect in my work. Keepin’ it real!

Bunking with the In-laws