Uncategorised
January 9, 2013May 29, 2020 Editor 1403 Views
John D. Michaelis decides he's going to give up one of the elements. But only when it comes in a bottle… no. 3 in our New Year's Resolution series

“We can’t live without spunk”, Coca Cola’s advertising campaign helpfully advised us in 2004, with images showing a bottle of their Dasani water (the one shown in the ad is no doubt full of purified spunk). This next to a bikini-clad woman, looking as though she was getting pretty emotional about a serious bad-hair day. Or maybe it was the idea of having to drink a litre of Dasani that had got to her. However she should not be confused with a Latina porn star named Dasani Lezian who, it would seem, positively welcomes male ejaculate as a facial cosmetic substitute.

After this dismal lack of of international marketing acuity, Coca Cola were forced to admit that their new product was actually ‘filtered’ tap water with additives, produced from an ordinary mains faucet in Sidcup, not far from the fictional Peckham Spring Water as flogged by Dell Boy in an episode of Only Fools and Horses. 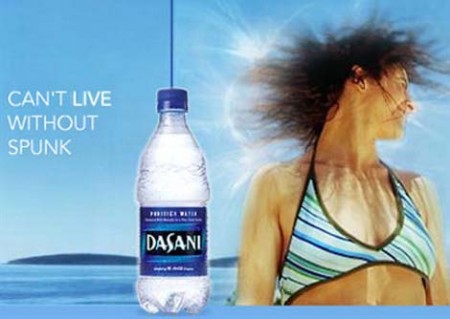 Dasani’s death rattle came when Coca Cola later had to turn off the spunk spigot (and a £7m advertising campaign), close their expensive new plant and withdraw bottles of Dasani from supermarket shelves when it was discovered that they had been adding a chemical banned in several countries because of its potentially carcinogenic properties.

etc Water have just sent ER a link to their terminally goopy (that’s ‘goopy’ à la Paltrow) eBrochure http://www.etcwater.com about their bottled water: “Our brand is about togetherness. When people get together, its (sic) often words that do the talking”. Or: “etcetera, (image of bar exterior in Mayfair) because (image of empty catwalk with etc Water bottles under the chairs) words bring us together (image of glittering, upmarket restaurant interior) , togetherness is life (image of group of pretty nurses giggling), and life is water (image of a future Master of the Universe grabbing an ocean on a giant globe).” etc Water is sourced and bottled, we’re told, “…in a picturesque beauty spot on the fringes of the English countryside.” Does this mean on the outskirts of Slough? It’s hard to tell. Then there’s a bit of stuff about recycling, paperless offices and ethical delivery (electric tanker lorries?).

etc Water’s pH level is 7.8, not quite as good as Thames Water’s, at 7.5. Thames Water’s drinking water costs around 0.097p per litre; the cost of a litre of etc Water is nearly 140 times that of drinking the water out of your tap. A bit less, if you’re convinced that the North Koreans and Taliban have joined forces to poison the UK’s reservoirs, and you therefore drink tap water through a Brita filter.

In blind tests, most people are unable to tell the difference between tap and bottled water. etc Water supports “a number of charities and events that are dedicated to environmental preservation and protection.” But no mention which these are. Might one of them be http://www.wateraid.org/uk/what_we_do/statistics/default.asp ? WaterAid is a charity that wants to stop children dying of a lack of safe water – around one every 45 seconds. That’s about the same length of time as the pause between gulps of the refrigerated bottled water of your choice.

Bold flavouring, expressive softness, sweet undertones. Harmonious refreshment. Time and the English earths (sic) salubrious minerals blended perfectly. Giving life to taste, incomparable. Veins of English chalk and sedimentary rock through which an infinite natural filtration of precipitation has repeatedly taken place. The quality of nature cannot be exceeded; so neither can the quality of our water.

Give me a break, etc Water. While I don’t have it in for you more than any other bottled water manufacturer (anyway, you might have a natural handicap in your choice of marketing company and copy writer, not to mention your choice of celebrity endorsement: the, uh, troubled  Sophie Anderton), I would love to see this absurdly wasteful and stupid industry fail as soon as possible.

If you want to find out the rather more prosaic facts about tap versus bottled water, go to http://www.tapwater.org/faqs.

It made my New Year’s resolution of giving up bottled water in countries with safe tap drinking water like the UK that much easier to choose. It’s been a no-brainer for me. Frankly, I’d almost rather drink bottled spunk. Or at least give the money I would have spent on a bottle of etc Water to WaterAid.

The reality of dreams

Hurrah for The Sisterhood!