ER’s Divya Khan:    Mama Biashara’s website calls charity a ‘dog-eat-dog business’. Can you tell us more about your experience of that?

Frequently, the CEOs of these charities are on six-figure salaries with many other officials not far behind. You have to fight off a lot of other charity dogs to ensure you can keep that kind of money coming in. Even over in the recipient countries, there are packs of needy organisations (and bigger packs of less needy) fighting for every donor. And everywhere you watch, the bigger or the prettier dogs or the ones that have been taught to do tricks, get the charity biscuit.  And, in a way, why not ?

ER:    By no means am I accusing you of this, but do you think aid in developing nations suffers from the ‘white saviour complex’?

KC:    I think there is an element of that. Especially back at the Poverty Porn Brigade – it looks very satisfying to see a sad, thin, doe-eyed toddler turned into a chubby, happy, doe-eyed toddler by the wondrous power of Oxfam. But there is not, as far as I can see, enough commitment for a real saviour complex.  There is also an element of bleeding heart white liberal guilt. And an element of ‘hobby altruism’ – a way of making yourself feel good about yourself. Increasingly (and commercially!) there is something called Slum Safaris – rich people go and look at poor people as if they were going to a zoo.

ER:    You do a lot of work with sex workers in Kenya. Do you ever meet women in Kenya who choose prostitution – not because of their financial circumstances, but simply because they want to?

KC:    I haven’t. I am constantly inundated with commercial sex workers who want another life. From the girls who start young (at 14 or 15) because they need school fees or because they want a dress or a phone, through to the huge number of university students who pay their way by prostitution, the young mothers and girls who have had no education who turn to prostitution as a last resort right through to the grandmothers out in rural villages who are left with a dozen grandchildren to look after and end up on the streets to pay for food, I have never met a Kenyan woman who chose prostitution over another way of life. 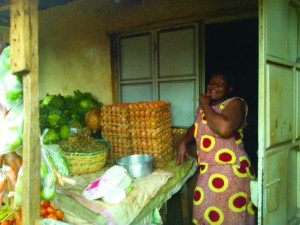 ER:    Mama Biashara is a business-based charity. Are there any British businesses you feel would help, indeed have any already done so?

KC:    We were very, very fortunate when we started and I got the help of Land Securities. They are the UK’s biggest commercial landlords and here they are, helping one of the UK’s smallest charities. They have been incredibly supportive. And because of that, there are thousands of people across Kenya who are in work, able to look after a family, and in some cases, simply alive because of Land Securities. If every commercial landlord had the attitude that Land Securities does then the world would be a much, much better place. Virgin Atlantic flew me and my many, many, many bags backwards and forwards for years. Sadly (for my bank balance) no longer and BA now give me 2 free bags and try to find me a decent price on a fare. We get the lifesaving multi-vits and cod liver oil we use from HTC – a company I found just by going online and who have been fantastic to us. Their cod liver oil is like a miracle for the sick that I see. I have watched several children who came to me as being ‘paralysed’ get up off their beds and walk after just a week on HTC’s stuff. Durex used to give me condoms but not any more. I had an idea (that never got off the ground) about twinning businesses there with businesses here – so someone big and glamorous like John Frieda would twin his salons with some of our little slum salons. I still thing it is a good idea.

ER:    Uganda recently passed a rather draconian anti-homosexuality bill. What are attitudes to homosexuality like in the rest of East Africa, and Kenya in particular?

KC:    Religion has done what it does best all across East Africa. Kenya is unpalatably Christian and Leviticus is bandied about with ferocity.  Gay guys are in hiding everywhere, many guys think that getting married will cure them and we get a lot of the gay community coming to us now. It is wholly acceptable to fire someone from a job because  they are suspected of being gay and it happens frequently. We have had gay Mama B peeps who have had their genitals set on fire, their houses firebombed… even the new constitution does not prohibit discrimination on the grounds of sexuality, although it prohibits it on every other ground. Lesbians, as so often, are more or less invisible. But thanks to the teachings of the Bible, even decent people I know consider homosexuality to be A Very Bad Thing.  When I tell them I have sex with other women they are shocked. But just assume it is some dodgy ‘white’ thing.  Across Africa homophobia is as common as malaria. And as toxic.

ER:    Are people more open to polyamory in Kenya?

KC:    When we do the workshops, we always ask for name, age, marital status and number of kids. Frequently we are told that a husband ‘comes and goes’. Many tribes are polygamous, although polyandry is not common.  I am always hearing women talk about their husbands taking ‘a second wife’. It is just the way things are.  I hasten to add that all of this is in the slums where I live and work. I don’t really know much about posh people – albeit you hear all the time about politicians having more than one wife. And almost all of them have mistresses. Women in general don’t make a fuss about this. They don’t really make a fuss about anything.

ER:    With the trials of William Ruto, Joshua arup Sang and Uhuru Kenyatta underway at the International Criminal Court, the West is facing the pretty awkward potential fact that Kenyans have elected a president who is convicted for crimes against humanity. Was this Kenya’s way of sticking two fingers up to Western authority?

KC:    It was definitely one of the reasons. Kenya is incensed that the white world is interfering like this. It is one of the few things that unites the entire country. Word on the street is that Kenya will happily send Ruto and Uhuru to the Hague after Tony Blair and George Bush stand trial for their crimes. Which – it has to be said – is a fair enough point to make. But the elections are very tribal. And Uhuru is a Kikuyu. The Kikuyu are the biggest tribe. And any opposition was divided on tribal lines and so any potential for real alternatives disappeared.

ER:    The recent gang-rape in Delhi shed a harsh light on how violence against women has become normalised in India. Why do you think women’s rights are in such a dismal state in the developing world?

KC:    Because anyone with any power doesn’t give a shit. The First World Feminists who are now reduced to seeing and demanding action on imagined misogyny in every look and every word, who are on the road far, far past equality – and heading to supremacy – do not really care about women’s rights. They care about First World Women’s rights. The developing world is a very different place. And a hard place for women. India is particularly horrendous. But even in Kenya recently, a teenage girl was gang-raped (and is now in a wheelchair) and the arresting police sentenced the gang to mowing a lawn. The most anyone here did was a bit of reposting on Facebook.  This is one area where something really needs to be done. But, as I say, I really don’t believe the First World Sisters can see past their own  huge problems of Bic making pink pens and men making rape jokes to get their tight little arses in gear to do anything real.

The Hottest Moments in Shakespeare

You read it here first